... some poor photographs of the finished PSC half-tracks: 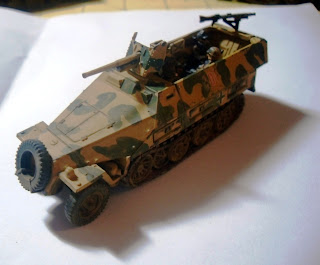 Above, the Sdkfz 251/10, with the Pak and cut down shield. The PSC models don't come with decals (although I understand that battle-specific decals are available separately. I'm not sure if I think that is a good or bad idea). The difficulty that that throws up is the prominent nose number plates that characterised these half tracks; but the solution is the handily supplied spare tyre! So, another bonus point to PSC. 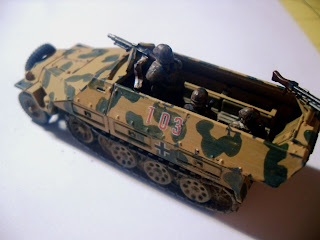 And the standard 251. The various comments re the lack of ammo for the gunner meant that I couldn't really ignore that problem, so I added a foil ammunition belt (though there is no ammunition box). It looks a tad better, I think. 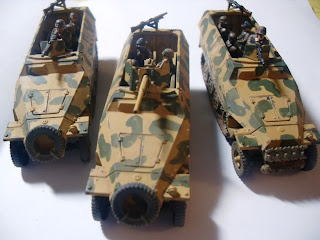 Finally, the trio together. I think that PSC have put together a good, value for money, wargamer's package here. Top banana!

While painting these half tracks, I went through my usual doubts re mid/late war German finishes. The basic yellow colour always gets to me. Now, I'm only a kit basher, so I will never go to the amazing lengths that the hard core (usually large scale) modeller goes to in order to get the 'right' colour of the basic yellow, but I do worry about it. Recently, I've seen blogs recommending Humbrol enamel Matt 93 'Sand Yellow'. I'm still partial to Humbrol enamels for armour and soft skin vehicles, but I'm not sure that 93 does the trick, to me it's too 'sandy', and, perhaps, too dark. In recent times I've used Revell 'Ochre', no:88. The problem with the enamel version is that the paint itself is exceptionally thick, and I can never seem to thin it adequately. So, I've shifted, as here, to using Revell acrylic no:88. This, too, is very thick, more like a paste, but being water based, it's easier to thin - once one has managed to gloop the stuff out of the little tub. But none of that addresses the question of how accurate the colour is for the basic German finish. There are plenty of photographs about showing vehicles only sporting the yellow base coat, but, of course, they are monochrome photographs. However, compared with what one might reasonably assume contextual colours looked like, I feel that the base colour did have a more yellow finish to it, as opposed to a sandy, or even greenish finish. But is there an answer to this? What do other people use?