Many moons ago, I left the blog, saying I was about to snip sprue on a late mark 1/72 Messerschmitt for my sort-of collection of Italian Social Republic aircraft. Time and tide went. I toiled in my place of employment. I spoke at an academic conference. I lifted potatoes. I took trains the length and breadth of England (for work). I was ill. All the things that eat up 'the days', as in 'what are days for?' (I've been on a Philip Larkin trip of late).  Finally, finally, I turned my attention to the Airfix Bf109 G-6. Not a bad little kit, but: 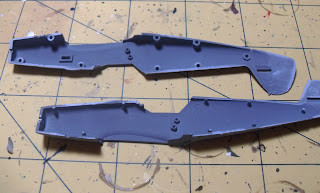 As is apparent from the fuselage parts, at some point this moulding has been marketed as a 'no glue', 'snap together' kit. The problem with that is that, excepting a seat with a hole (for the pilot to snap into), there is no detail whatsoever for the cockpit. Blast. Well, I made up a few spurious bits and pieces, added a harness to the seat, and cut a crude plasticard instrument panel. The latter looked horribly basic, but then... 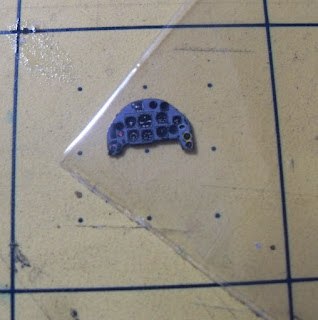 A note in one of the scale aircraft magazines directed me to Yahu! Excellent Polish chaps who produce very nice, and very cheap 1/72 instrument panels - see above (that's a 2cm square on my cutting mat). Highly recommended, especially as the UK supplier, Story Models,  seems tip-top - I ordered last Friday afternoon, and had a lot of little instrument panels today, Monday.
I was recently in Budapest, for work reasons, but had the opportunity to have a look around. For a child of the Cold War, Budapest, of course, resonates. The centre of the city, both sides of the Danube, has, naturally, been much upgraded since the end of Bolshevism in Europe. Nonetheless, even the rather magnificent frontage of Cornivus University bore subdued traces of both the terrible siege of 1944/45, and the 1956 Uprising. But good workmanship, and neat paintmanship, meant that one had to look carefully.  But that wasn't always the case, and I came across this building that bore more obvious traces of the city's torment:﻿ 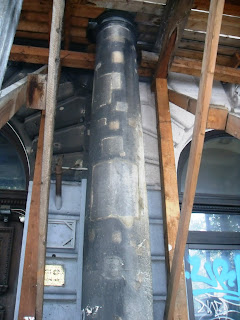 More pleasingly, there was this sign (from the 1930s ?) over the entrance to a quiet, refined, and, for the non-Hungarian speaker, vaguely puzzling bookshop:﻿
﻿ 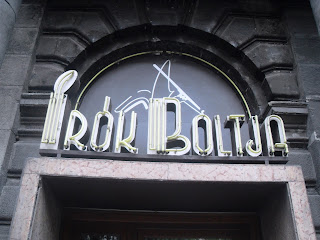