Like Norma Desmond in Sunset Boulevard, my adoring public (well, Chris Platt) have been calling 'encore'! Who am I to deny them? Who am I to rest on my laurels? To digress for a moment, I recently bought a biography of James Kennaway, the author of that perfect first novel, Tunes of Glory (also a major motion picture starring....) , and read an amusing story of his early days in the army. When Kennaway joined The Black Watch for his national service, the adjutant told him that he could apply for a commission after his basic training, or he could have two easy years as a corporal 'in the Intelligence Corps, whose badge is a pansy resting on his laurels.' Not exactly politically correct (and would an officer of the Black Watch care?), but of its time, and with a link to laurels. To return to the point at hand....

It is some four months since I posted last, and little in the way of glue and paint has taken place. However, I have, not so long since, completed the Airfix Whitley, and what a lovely, lovely kit: 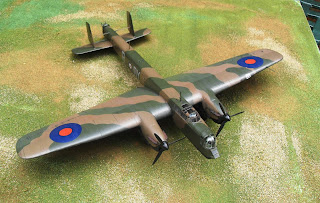 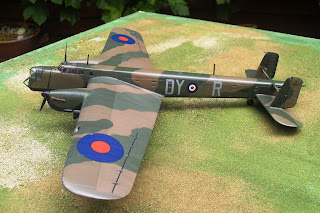 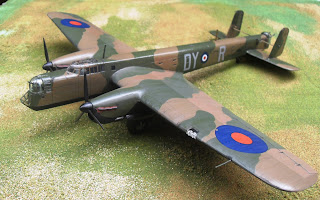 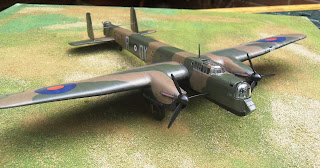 As you can see, it's factory-fresh. If you know your Whitleys, you will, by now, have spotted the missing bit. After finishing the paint job, the decals, the wash etc, I went to add the aerials and the rather prominent DF loop housing. No problem with the aerials, there they were, on the sprue. But the DF housing ?? Where? Why? WTF?? Not there.   That will teach me to spend months doing a kit.

On a different note. On the 24th July, it was exactly a century since the photograph below was taken: 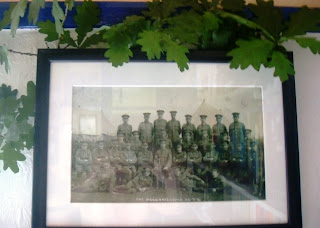 It is entitled 'Sgt. Gregory's squad', and shows a newly trained squad of men from the King's (Liverpool) Regiment (the old 8th Foot). One of the men is my maternal grandfather. Of all the men in the photograph, only my grandfather and five other men survived the Western Front.  I wasn't sure what to do on the 24th July, a century later.  I had an idea of taking the photograph on a pub crawl around the town, but, then, I didn't want to end up dropping the photo.  In the end, I cut some leaves from an oak tree in my garden (in a pot!), and decorated Sgt. Gregory's squad with English oak. God rest their souls.

I haven't been doing nothing at all since I last posted. My allotment plot has gone from fit only for an agent orange attack to a nicely productive 1/16 of an acre. I've also written/had published a few bits and pieces, with some relevance to those who are interested in the Very British Civil War type world. For these latter, see the sidebar.