...in 2016 to you all!
Contrary to all the rules of good blogging, I have neglected my duties here, and posted little. I had, indeed, thought to let these pages wither on their electronic vine.  But, perhaps not. What is started must be finished.  That, in kit bashing terms has been increasingly not the case. Old age? Too much in the way of the diurnals? Jaded?  Probably all three. However, with the onset of the Christmas and New Year holidays, I determined to kit bash something in the 'classic plastic' line. Inspired by an article by Jonathan Burns in Classic British Bombers, edited by Gary Hatcher (by far the best plastic aircraft modelling magazine editor), and armed with: 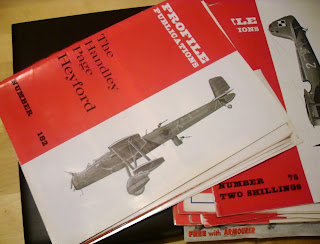 a 48 year old copy of Profile's The Handley Page Heyford, I set to on a 35 year old Matchbox 1/72 of the same.  Jonathan Burns' article was very useful, in particular his hard-won advice about getting the engine nacelles absolutely smooth on the top, to ensure proper wing mating. I didn't take photos of the Heyford as a work in progress, but here's a few (poor) shots of it on the shelf: 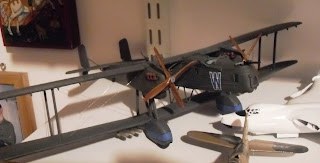 Marvellous beast. Pilot sat 17 feet up in the air, fuselage mated to top wing, giving excellent upper hemisphere vision, main bomb load carried in thickened centre-section of lower wing. That lower wing, and other devices, meant that the Heyford could be refueled and re-armed within 30 minutes - hence the manufacturer's monika - 'the Express Bomber'.

Not that it was 'express' in any other meaning of the word, with a top speed of 134 mph. Mind you, it was a dedicated night bomber, but, still, for a 1936 bit of kit, somewhat slow. Had the Munich Agreement not happened, it would have been the RAF's main weapon in any bombing of Germany. 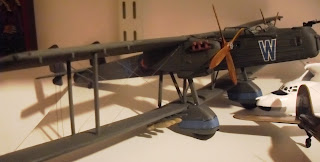 Withdrawn from frontline service days before the UK declared war on Germany, it was replaced by the Whitley - which, very happily, has recently been released by Airfix...  can feel a 2016 kit bashing theme growing.
In other news, my son, who for so many years has been a denizen of the DARK SIDE of wargaming (i.e., the weirdness that is Warhammer and 40K), has, I hope and pray, seen the light. He has now started a new Old School project, which can be viewed here at The Molgravian Gazette. Please visit, and encourage him - it will make an old man very happy...
﻿
Posted by AlFront at 12:34 14 comments: