FROG kits always had something slightly exotic about them back in the day. For one thing, they were harder to find, and more expensive, than Airfix kits, for another FROG seemed to cover rare and wonderful aircraft. The two FROGs that I bought in the early 1970s were the Heinkel He 219 ‘Uhu’, which with its tricycle undercarriage, sticky out radar bits, and funky camouflage, looked like nothing else in my collection. The other was a Blackburn Shark, whose floats I subsequently salvaged from the Shark’s back garden ‘crash’, keeping them for a never to be completed float equipped Spitfire conversion. And now, over 40 years later, I’ve got hold of a very old boxing of FROG’s Blackburn Skua, courtesy of my son - a present for his ageing pater.

A quick google, and it looked like the ‘red series’ boxing that I had was one of the earliest, some 50 years old. The box was in pretty good condition, and all the parts, excepting the wing light transparency, were there, as were the decals and single piece instruction sheet – both of which were rather spectacularly yellowed. 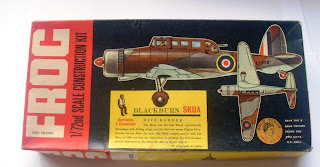 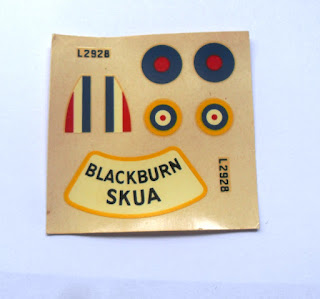 Now, the Skua is still a rare bird, and as far as I know only Special Hobby have kitted it, in the gentleman’s scale. There is also limited information available, but Mushroom Model Publications came to the rescue with Matthew Willis’ fantastically informative Blackburn Skua & Roc. Willis’ book gives a good account of both aircraft, their development, and deployment, along with masses of photographs and 1/72 scale drawings and colour views. The Skua was a typical naval compromise, designed to give the FAA an accurate dive bomber, and an escort fighter to see off threats to the fleet. The particular demands of the Navy meant that the Skua had a good range and was strongly built, even if it was underpowered and not up to facing land-based fighters. At the outset of the war it took a number of ‘firsts’. A Skua was credited with shooting down the first German aircraft (though later evidence gave this accolade to a Fairey Battle, of all things). More spectacularly, Skuas from 800 and 803 Squadrons, FAA, were the first aircraft, and the first dive bombers, to sink a warship, when they sank the cruiser Königsberg on 10th April, 1940, during the Norwegian campaign. 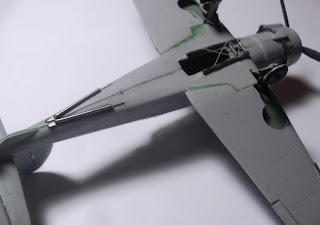 The kit plastic was fairly thick, and, of course, boasted extensive raised panelling and rivets. Given the age of the kit, and the fact that I wanted a real FROG, I was happy with that. The scale plans in Willis’s book showed that everything was good in terms of overall dimensions, with the odd exception of the fin and the horizontal tail planes. Both of these were undersized, but of the correct, slightly complex shape. Not willing to face fabricating replacements, I decided to live with that. Inside the fuselage, things were pretty bare, with a floor, two comfy chairs, two pilot figures and a misshapen machine gun for the Telegraphist Air Gunner (TAG). I had a reasonable Lewis gun from a recent build of a Matchbox Heyford which replaced the blob, but something more was needed. Although the long ‘greenhouse’ canopy of the Skua is more like a shed, with heavy framing and small windows, I still wanted a bit more inside. Looking at the photographs in Willis’s book, what struck me was the unfortunate position of the TAG. Effectively he sat on a cushion stuffed between two long, unprotected, fuel tanks that ran nearly the length of the cockpit. I added these out of plasticard, plus two seats from the spares box, a fuse wire control column, and an inaccurate instrument panel. I reckoned that would suffice for peering at through the cockpit windows, and turned my attention to the underside of the fuselage. FROG’s Skua had a completely inaccurate underside, being a flat panel from engine to tail. In fact, the Skua carried its main bomb load semi-recessed in the fuselage, and it was delivered towards the target by a bomb crutch. In addition, being designed for carrier operation, there was an arrestor hook. I cut out the bomb bay, which was open, and fabricated a bomb crutch with brass rod and stretched sprue. Plasticard and brass rod made up the arrestor hook, and I was ready to close up the fuselage.

The profile in Willis’s book show L2928 sporting an individual code ‘S’, which was not included on the small decal sheet. Also missing were the underwing roundels. I was able to source those from an Airfix post-war PR Spitfire, but had no luck in my decals library (old fag packet from the 1970s full of tiny clipped off decal bits) with the ‘S’. After a couple of coats of Klear, I was ready to try the ancient decals on their little square of yellowed paper. I expected them to explode into fragments when they hit the water, but, not in the slightest. In fact, it took a good while to separate them from the backing paper, but with some setting solution, they worked perfectly, and settled nicely over the raised panels and rivets. The training aircraft looked used, tired, and pretty grubby, so I added finishing touches with a wash, some chipping, and pastels, and there she was, sitting on the grass strip, waiting to train more FAA heroes, in 1/72.