It's some time since we heard of fighting between those two old enemies, Maltovia and Lovitznia, but word has reached us this day of the apparent fall of Brnad.

When last we heard from that old frontier town, the failure of the so-called 'Liberal' government to see to the proper defence of land and people, had led the Maltovian National League to organise a militia (see our last report here). Despite the continuing threat of the warlike, and expansionist Lovitznians, little more has been done by the corrupt, defeatist 'Liberal' government. And now this: 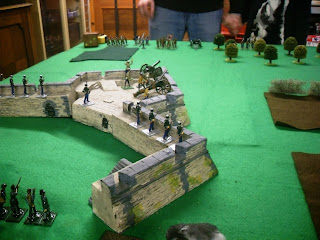 Above we see the poorly garrisoned walls of Brnad, with merely half a regiment on the walls, and the MNL mustering at bottom left.  In the far distance can be seen the regiments of Lovitznia, and, beyong, the two fiendish generals (said to be father and son), lowering over the scene. 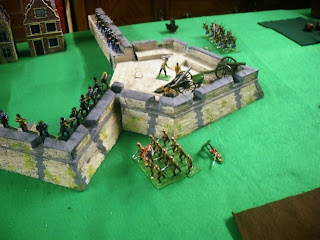 The above photograph shows the Lovitznians in their dash to the walls, shaking off limited casualties from ineffective artillery fire, and facing the very limited firepower of the MNL. It was rumoured that a reserve regiment of the Maltovian Army was on its way, but bad going (and appalling dice luck) meant that the regiment in question: 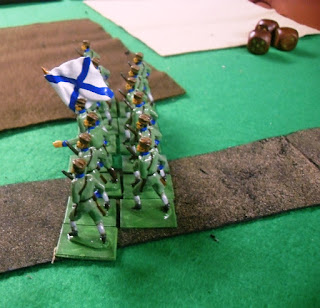 arrived too late (above) to prevent this awful event: 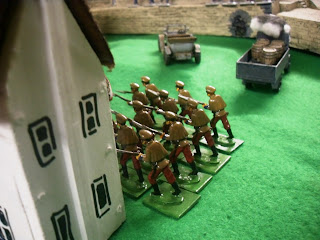 the entry of those brown-tunic'd devils of Lovitznia into Brnad. 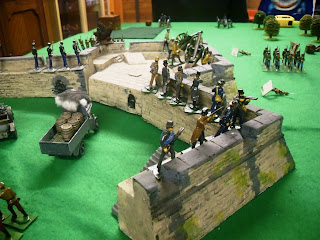 The situation, as we go to press, is shown above.
This means war!  And authorities on the subject suspect that the days of the 'Liberal' goverment are numbered!!
(Rules: Ross Mac's 'A Rattle of Dice')﻿
Posted by AlFront at 08:15 12 comments: