The Militia is embodied...

Like Frankenstein's monster, this mixed bag blog lives once more. Like General MacArthur after long years' absence, it has returned. Greetings to my old friends of the blogosphere, the toy soldier aficionados, the wargame chappies, the kit bashers and scenery makers. Greetings!

I will not bore you with the vicissitudes of life that explain the absence of Cpt. Al Front and his tin men. Instead, this new season brings news of those fervent patriots of the Maltovian National League (MNL). As you will remember, the shaky peace between Maltovia and Lovitznia means that neither side can afford to let down its guard for long. So, as the last snows melt, the militiamen of the MNL have been embodied for their annual field exercise: 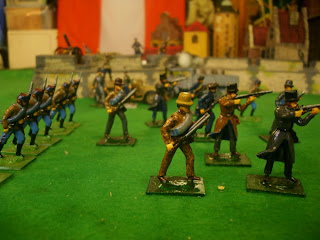 In their role as part-time skirmishers, they train in open formation to the front of regular Maltovian line infantry.

The MNL's efforts are watched by that hero of the nation, Maj. Vlasov, and the ever-optimistic militia commander, 'Buller' Szlod: 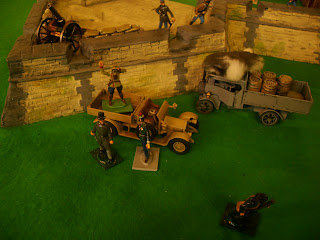 Steaming gently near the staff car is the beer wagon, with, it is hoped, sufficient beer for the militia and regulars. 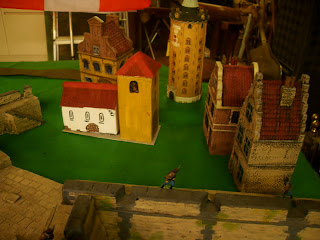 Behind lies yet another ancient fortified town, Sblad. Yet another disputed area on the Maltovia-Lovitznia border. No one can be sure when the next clash will happen.

Stay tuned. This news was brought to you courtesy of the aptly named smoke, 'Balkan Mixture' . Recommended by old buffers everywhere. 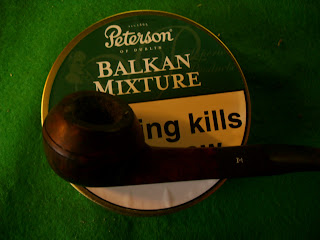 I have added a few new publications to the side bar here. My latest Pen & Sword book is: Amateur Armies: Militias and Volunteers in War and Peace, 1797-1961. Published in October 2020, it is a rattling rush through some interesting volunteer and militia units, the societies they sprang from, and the wars they took part in. Those wars include: the French Wars, the War of 1812, the second Boer War, the Spanish-American War of 1898, the Spanish Civil War, and the defence of Castroist Cuba, 1960-1961. Click on the image for the link.

I have also started self-publishing again, with a new biography of Dorothy Eckersley, the female 'Lord Haw Haw'. That booklet (paperback, 106 pp, illustrated) came out last month. It is entitled: Long Road to Berlin: Socialism, Stalinism and Nazism; Dorothy Eckersley's journey to German Wartime Radio. Click on the side bar image for a link.

Finally, I have just launched a history website-come-blog for anyone interested. It can be found here: