My wife originally ordered one of the new Airfix Whitleys for a Christmas present, but, as you know, the shop keeper had to fight Airfix/Humbrol every inch of the way for them to agree to send him one, for money.  Strange, perhaps Airfix/Humbrol is actually controlled by a modeller who just can't bear to part with the kits, no matter how large his stash grows.  However, one has arrived in time for my birthday (which approaches fast), so I will, at last, get my incompetent, kit-bashing mitts on one of Coventry's finest.

Speaking of these - incompetent mitts - I have just finished one of AZ Model's  MeBf109s. That noble manufacturer appears to be happily kitting its way through the entire Bf109 series. What attracted me to their boxing of the Bf109G-6AS was the choice of three night fighter scheme, including an all-black one. Now, we are all familiar with the difficulties of an all-black finish, and you will see that I am now even more familiar with those difficulties: 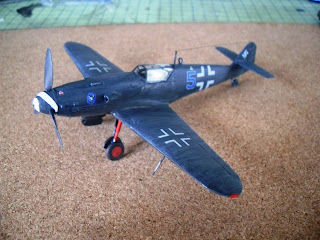 I had intended to make the black look faded, reasoning that matt black is a finish that does, indeed, fade quickly. 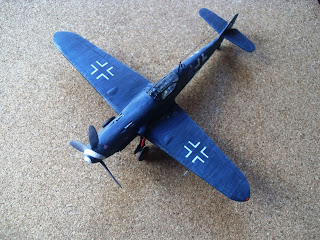 I achieved a sort of faded look by dint of a finishing disaster - the final coats of matt varnish unaccountably decided to leave a streaky finish.  I had no idea as how to counteract that, so, trying to make the best of a bad job, I left it, telling myself that it was 'fading'. 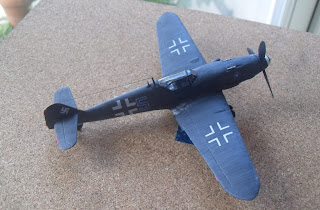 Still, being both long and short sighted, aged, and addled, it doesn't look too bad at the back of the shelf.