Short of a sixth unit for the next planned 'One Hour' game, I dug out some already undercoated 'Emhar' 'British Infantry, Peninsular War 1807-14'. These are very nice figures indeed, and a better hand with the paint brush could make a really fine job of them, whether as our noble lads (Irish - given the Peninsular ?) , or as Yankees: 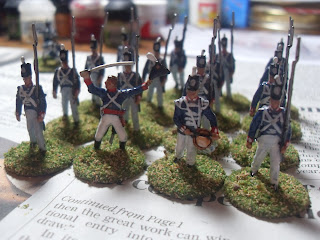 While painting up the Americans, I came across this fellow: 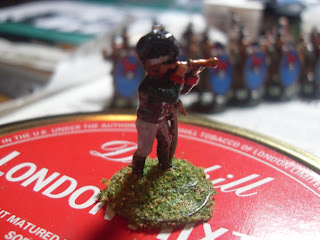 He is a true veteran, and first graced my tabletop (the same table he is on here) sometime back in the early 1970s, sporting an even worse paint job, in gloss blues and greys. Of course, he is a figure from the Airfix Waterloo RHA set.  After years spent knocking around in an old sweet tin, then the last few years in a makeshift sand-pit, his loyalty has been rewarded. Now in the uniform of a Provincial cavalry regiment, he, too, will join the 1812 'One Hour'.

While doing this emergency painting, I had occasional ponders about the planned 'One Hour'. The core rules for all the periods covered are pretty constant, as one would expect, and therein lies the beauty of the system. However, thinking about 1812 and the initial invasions of Canada/British North America, I decided that assigning 15 points to every unit would be just too ahistorical. Militias played an important part on both sides. However, whereas the militias from Upper and Lower Canada performed well, the US militias (with some exceptions) performed very poorly indeed. The answer is, I think, to reduce their starting points value to 12, or even 10. Similarly, although the scenario has six units per side, the British-Canadian forces were very much outnumbered at the start of the war, so I  think one unit needs to go.

Recently, the crazed fuckwits that are the Islamists have been redoubling their murder efforts - in Egypt (against Christians), in the Philippines, in Kabul, in Syria, and, of course, in my homeland.  I hope the UK government ACTS.

But, in the world there is still beauty and perfection: 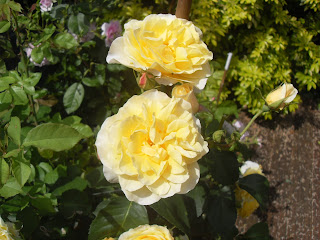