... bloggists. Like many people, I'm often in two minds about the whole 'virtual' world that exists, and it took me a long time to enter the e-world of blogging. But, I have to say, I am glad that I did. One of the great things is the discovery that across the world there are plenty of other decent fellows who, in the words of the toy soldier blogger Ben B, are 'freaks who play with toy soldiers'. It is a great comfort to think that there are scattered islands of toy soldier sanity out there. And the informal network that exists through 'followers' and comments on posts makes it feel as if there is a Communion of toy soldier and wargame enthusiasts - a refuge of them indeed!

I've mentioned before how inspiring Paul is over on Plastic Warriors. His dedication to the refurb leads the way, not to mention his Soviet levels of tank production! So, I was somewhat chuffed to see that Paul had picked this humble blog as one of those he has given a 'LIEBSTER AWARD' to. Brilliant ! Many thanks, Paul!! I will, of course, be posting soon on my choices. Watch this space.

I find it very interesting that so many toy soldier/wargamer bloggists are native English-speakers - from Australia, New Zealand, Canada, Ireland, Scotland, the USA. There is something in that that I find comforting in a very rapidly changing world. And, I suppose, it all goes back to the French and Indian War. There was a Frenchie once who said, 'My homeland is my language' - which is an interesting debating point. Also, Bismarck once said that the most important fact for the then coming 20th Century was that the USA and the UK spoke English; although, famously, Churchill also said that the Americans and the British were a people divided by the same language. But it is not just the inheritors of the FIW that are part of the Communion, as there are bloggers from Sweden and Italy, for example, who pitch in, and Giano's recent post about a Forces of Valor KV2 build sent me into my loft to dig out an old Fujimi version of the KV2: 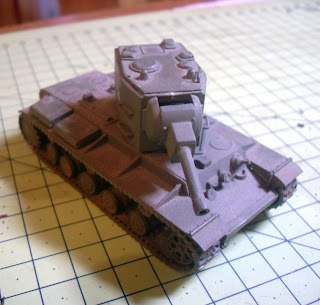 As you can see, it needs a bit of a Plastic Warriors' style refurb. The drive sprocket is damaged, and there is an important bit of the mantlet missing from the top of the turret front, which I'll have to scratch build. 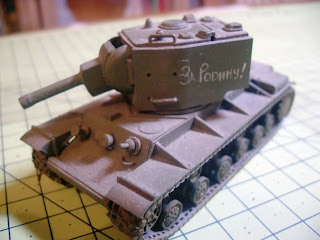 The model has been sitting in an open box in the loft for about five years, so the way in which the dust has gathered on the tank is interesting, gathering, as it did, in the nooks and crannies, but not really on the raised surfaces.

Finally, at the end of this ramble, another view of the marvellous Upper Canada blockhouse: 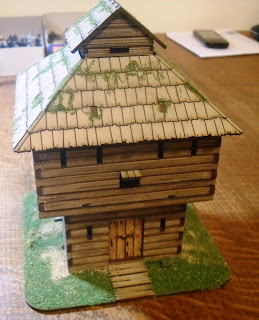