... no, not the moniker of some dreadful drugged egotist of the nightclub 'scene', but: 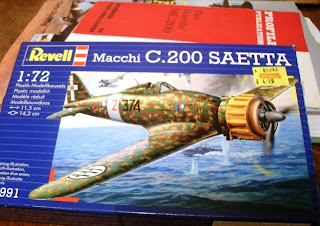 A holiday purchase, and as I have to wait for the next batch of 42s from Irregular, there is time to start this absolutely classic Italian aircraft. Dating back to 1935, and first flying in December 1937, the Macchi MC.200 was the better contemporary of the French Morane Saulnier 406, the American P36, known to us Europeans as the Hawk 75A, and the equal of the Hurricane I. Unfortunately for the Italian Regia Aeronautica, the Italian aircraft industry just wasn't organised to mass produce, and the total number of MC.200s built (just over 1,000) was feeble when contrasted with the stunning production of the UK aircraft industry, which, by contrast, was able to send 3,000 Hurricanes to the Soviets (some of these being built by Canada). Worse, although the MC.200 had plenty of development potential (cf. the single MC.201 prototype, and the very successful MC.202 and 205), the later developments took so long to reach the frontline units that the MC.200 was still fighting come the September 1943 Armistice.  But, enough of all that, back to the model. The current Revell incarnation includes decals for a single Italian version, from 374a Squadriglia, 153 Gruppo Autonomo, Italy, April 1941. As any Italian aircraft geek knows, Italian aircraft were finished in a bewildering array of spots, dots, smoke rings, and block colours. So, it was off to my references. First stop: 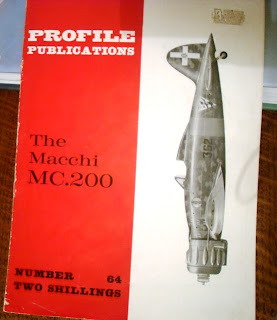 Good old Profile (c.1966, 2/-). Excellent close up detail of the Macchi, but none of the colour profiles featured an aircraft of 374a. However, I also possess the indispensable second edition of Chris Dunning's Courage Alone; The Italian Air Force, 1940-1943 (Crecy Publishing, Manchester, 2009). Dunning's book features unit histories of almost all the RA's squadrons, but not 374a ! Aaaargh. However, there is material on the famous Asso di Bastoni, 153 Gruppo, and two profiles: 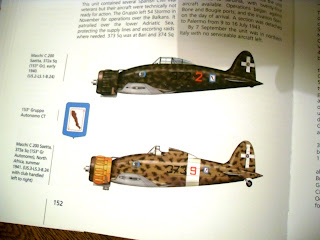 So, it looks as if I'll have to go with the Revell option, and dream of all the other finishes, such as these in Profile no:64: 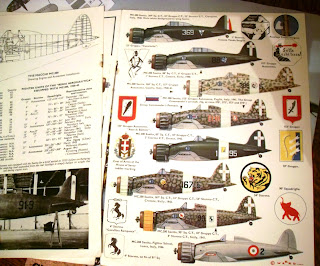