... which is my new word of the moment - thanks to Paul Elliott's The Last Legionary. I'm still reading his very nicely put together book, and I'm savouring each section. I like his little vignettes about his own marching and camping in late Roman legionary kit, largely on and around Hadrian's Wall. A few years ago, my son and I walked the Wall from Hexham to the Solway Firth. We had some good 'wild camping', with a great little pitch on the salt marsh on the last night, and a first night's pitch when I lay with just my sleeping bag draped over me watching a silent electric storm. But it was hot, very hot, and it was a struggle just to keep hydrated. So, full marks to Paul Elliott who seems to choose extreme weather conditions in which to test out his reproduced legionary kit.

Not only has The Last Legionary fired my imagination, it has also come just at the same time as I have (somewhat late in the day) discovered DBA, so it will not be a surprise to see the beginnings of my newly painted DBA late Roman British:

Donnington's, 15mm. As far as I understand it, the only information we have relating to shield designs of the period in Britain are those of the Field Army, the comitatensis. So, these are speculative shield designs for my men of the frontier.

Lack of time, lack of opponents and lack of space have all pushed me over the last year or so towards multiple based troops, grid and small table space gaming. I have, as I have mentioned before, been inspired by Bob Cordery, and Ross Mac, both of whose blogs are deservedly popular. But I can also thank John Curry for his magnificent project of republishing so many fantastic works from the past, such as: 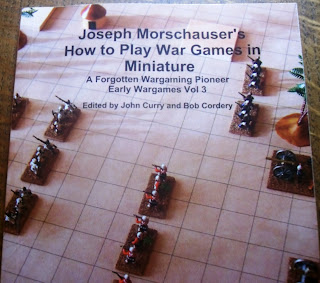 Food for thought, and I fully intend to create a Morschauser 'shock' period army, or two.