After my recent brush with the Bad Mahdi, I thought I 'needed' some more Jacklex 20mm figures. I love the little chaps, they have a real air of bravado, élan even, captured in their tiny tin and lead frames. I'm pretty sure that the last time I bought Jacklex figures, they were from Spencer Smith. However, as this was some years ago, I may be wrong. This time when I searched for Jacklex, I discovered they had migrated to a rather fine site, called, not surprisingly, Jacklex Miniatures. The worthy tin men are in the hands of a fine recruiting sergeant, Mr Mark Lodge, who has mastered the Old School approach, not least by sending one's reinforcements like this: 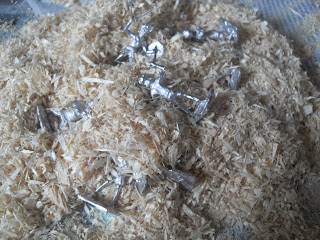 Packed in very nice little cardboard boxes and, joy, sawdust!  Just emptying out the box took me back nearly 50 years, to the early 1970s. A poor grammar school boy was I, with little disposable income, but influenced by George Gush's famous Airfix Magazine series, 'Renaissance Warfare', I bought a few Polish winged hussars (those saviours of Vienna and Europe) from Minifigs. The sawdust they arrived in has long gone, but not the box: 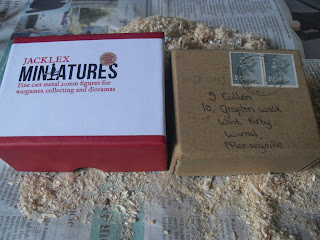 Just look at that. Instant time travel thanks to a cardboard box, some sawdust, and some tin men.