In the 1950s in the UK, hep cats, copying their jazz confreres from the States, dismissed older folk as being 'square'. Typically, the new slang was, in fact, much older, the pejorative use of 'square' actually dating from the late 18th Century, when the hep cats of the day referred to the more staid members of society by reference to the square-toed shoes they wore.

Today, among the tabletop brigade, square implies the square-based wargame, of which Cpt. Front is a devotee. Following his recent return to the ranks of tin men, Front has been peering at various texts and came across this among the book hills of his little home: 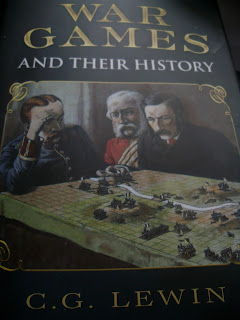 Published by Fonthill in 2012, it is a lavishly illustrated, fascinating account of the wargame as board game. On pp. 78-82, the wargame Polemos makes an appearance: 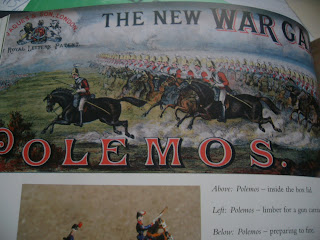 As Mr. Lewin says, 'Polemos used some brightly painted model soldiers, horses, and gun carriages. This fine military game was invented around 1885 and was awarded a prize medal at the International Inventions Exhibition the same year'. The game was played on a folding linen board, 62 inches x 54 inches, marked out with 600 squares, each 2inches x 2 inches. Mr. Lewin's comments, 'it would appear that luck play little or no part in this game, which must have required intense mental effort'. 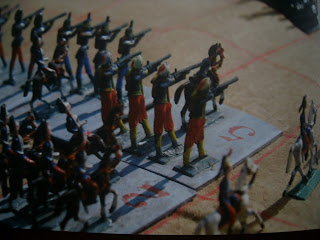 Fascinating stuff. The game is, of all the numerous games covered in the book, most like what we would regard as a war game, and, as such, may well qualify as the first square-based war game.