I had intended to return to the Maltovia/Lovitznia feud by way of Ross Mac's 'A Rattle of Dice' rules. However, I see that during my long absence Ross has produced another set of rules that seem to fit this conflict, his 'The Square Brigadier In The Great Game' rule set. These look like just the sort of rules for an old chap like me, and, more importantly, for my shiny toy soldiers in 42mm.

To play test them, I set up a straightforward Lovitznian assault on the old town of Sblad. No finesse here. The Lovitznian plan of attack involves a column attack towards the flank of the old town where the walls have long been removed to make way for a metalled road. The infantry attack to be supported by field artillery bombardment of the town walls, with the intention of distracting the Moltovian fortress artillery. 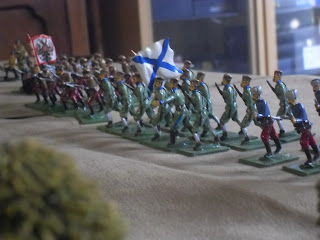 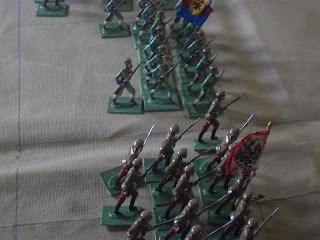 Supported by their field artillery: 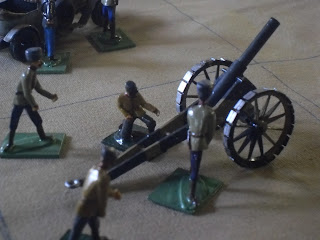 Col. Vlasov, commanding the defences, immediately took the important decisions, ordering the beer wagon into the safety of the town, manning the town walls with the militia and the professionals of the fortress artillery, while deploying his field force to cover the weak flank of Sblad.

The first few moves went as expected, with the artillery exchanging fire, the Lovitznian line infantry attacking with great élan, and their light infantry making their way through woods on their left flank in the hope of enveloping their opponents' field force: 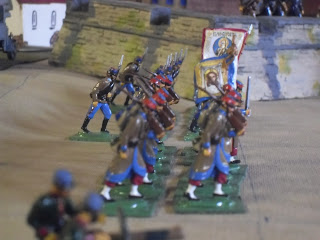 Above: the Moltovian field force prepares to receive the main assault. 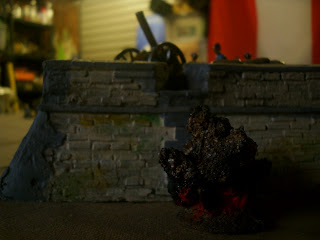 The Lovitznian artillery taking its time to find the range of the defences (more training is clearly needed). 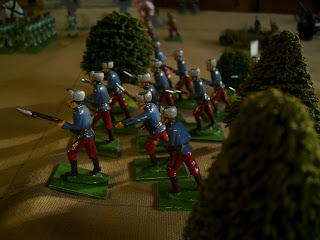 Light infantry in the woods. 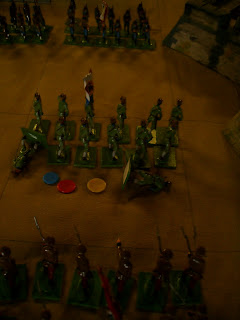 The assault column taking casualties, two more hits and the lead regiment is off the field.