... grumbles. I've only had a few mouthfuls of Aussie wine (I buy Old Commonwealth or England for food and drink, English for footwear and trousers, Scottish for jackets and suits), so it isn't 'drumbling', which, apparently, is drunken grumbling. Anyway, before I grumble, I will rejoice, rejoice in the delights of grandfathership. My grandson is three and a half, and a fine companion, and, at the moment, I am getting whole days of his fellowship. As anyone who has had the stewardship (now that's a lost word!) of a child will know, it grants you privileges - such as shameless playing with toys and wooden swords, loitering in toy shops, sharing bags of sweets and good books, such as: 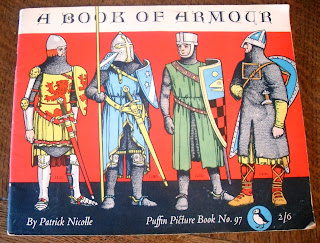 This was today's purchase in an Oxfam second hand bookshop - a beautifully illustrated, serious, informative history of western armour (with a nod to the East) from 1954, and written in an intelligent fashion using high register language. In other words, the sort of book that no publisher would dream of producing for today's children - who have been undermined by new cultural norms, a frenzied media, and poorly educated ego-maniacs in power at all levels of society. The outcome of this being the elevation of the Budgie brain to the status of 'world class'. 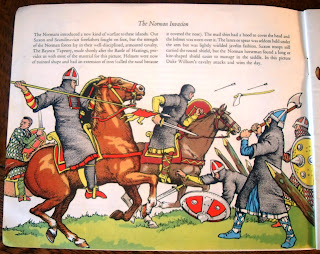 However, this 30 page, landscape format book is a reminder that once, and not so long ago, standards were higher, and children often engaged with more than contemporary fluff. 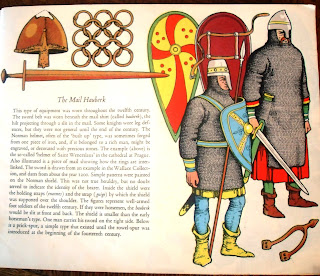 Two other things struck me about the book. Firstly, at 2/6d (Half a Crown) this was a pretty expensive children's book for 1954. More than a decade later, Half a Crown used to get me a paperback book and sweets. Half a Crown - that was before we were fobbed off with the toy money that came with the inflation boosting idiocy of decimalisation, or the dreadful designs that we now endure which are clearly intended to acclimatise us to the Euro. However, 2/6d may have been pricey for 1954, but in those days there were still public libraries galore, all of which were full of ... books! The second thing that struck me was that the list of other books in the series suggests that the books were written by experts. For example, 'No:86 'Airliners'' was written by John Stroud, who was an extremely well-known aviation journalist, while 'No: 74 'Locomotives'' was written by W.J. Bassett-Lowke and Paul Mann. Bassett-Lowke, of course, was from the famous Bassett-Lowke railway model company. Speaking of which, locomotives, as opposed to models: 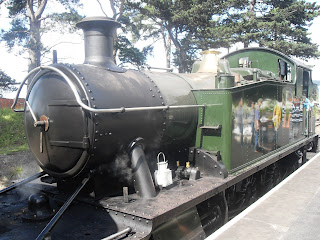 This photograph of a fine tank engine was the product of yet another bout of grandfather duty - a day trip to the Gloucestershire and Warwickshire railway, an entirely volunteer run steam and classic diesel affair, and yet another example of the quiet, domestic genius of the English.

While my grandson came away from this latter day GWR with a small steam locomotive, my loot was confined to this little drip mat for my morning coffee: 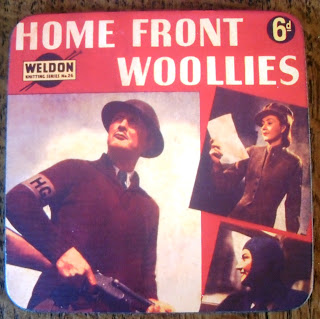 My long-standing interest in the Home Guard meant that I couldn't resist this pencil moustachioed Home Guard hero in his knitted pullover. A pity that the mat was 'Made in China'. I don't care about the economic theory of 'comparative advantage', the idea that a shipping container stuffed with these things came half way around the world so I could buy one is just silly.