For my first run-through of the DBA rules, I went for a simple, head-on clash of arms between English and Danes. My main idea was just to get a hang of the rule mechanisms, in a very basic way, I hasten to add. So, to the battle: 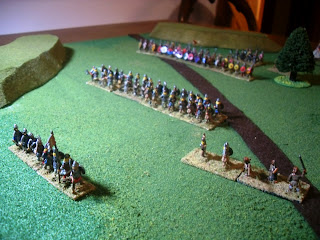 After the first moves, poor dice throws left the Danish/Viking force somewhat split, with the bulk of the army some distance from the command stand and support, and light infantry (or whatever DBA calls 'em) falling behind too, and not in the outflanking position I had intended. The English/Anglo-Saxons (in the distance), by contrast, had been able to maintain cohesion, with some reserves (also acting as an outlying camp guard) close at hand. 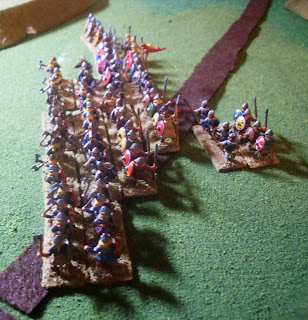 Shieldwalls clash! The terrain set up (diced for) had imposed a staggered meeting of shieldwalls, with both sides in a strong position to outflank the other, but with the English (on the right here) having their two stand reserve in a position to counter an attack on their left flank. 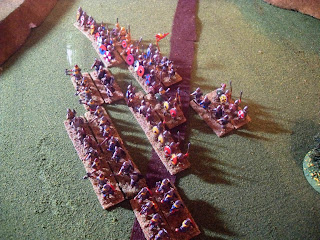 The opposing shieldwalls stagger, with both sides seeing recoil movement.  Flank attacks developed, but the English were able to throw in their reserve, while, the Danes found themselves in the tricky situation below: 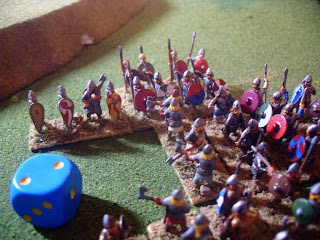 Pinned to the front by an unbroken shieldwall, and attacked in the flank by 2 x spears, and 1 x Huscarls (blades). Yikes! The Danes were also unable to bring up their reserves and command, which never got into action. 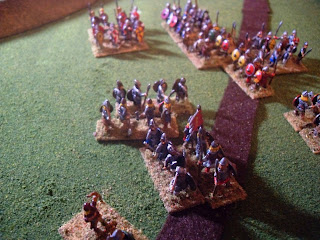 End state: the Danes had too many stands trapped between the outflanking English and unable to recoil because of their own front facing shieldwall. Victory to the English! And I wouldn't want to be the Danish/Viking chief, who didn't even draw his sword.

My first DBA. I kept it simple, and it was enjoyable. I'm not sure how I could have manoeuvred enough elements to attack either camp as the length of the shieldwall in addition to the position of the terrain effectively blocked off each camp.