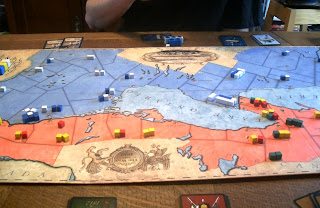 Some months after buying the '1812' board game, I was finally able to get it on the table and muster the little blocks of wood. The view above is from the side of the good guys, while the bad guy's elbow and his US regular forces (blue) and militia (white) face me across the Great Lakes. We didn't play a full game as we were just acquainting ourselves with rules and mechanisms, but, happily, we were quickly drawn into an historically accurate struggle: 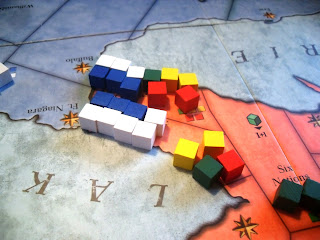 The US invaders charged across into the Niagara peninsula, but were, despite the disparity of forces (red blocks = British regulars, yellow = Canadian militia, and green = Native Peoples) defeated: 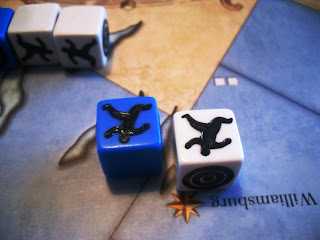 A series of poor dice rolls by the baddie, such as these routing US regulars and militia, cleared the Niagara area.

The game has a nice series of different scenarios that match the different phases of the war, so, hopefully, we'll get to play through them in the not too distant future, and see if history repeats itself. I fully expect that the water movement rules will be conflict deciders - whether by canoe, fishing boat, or naval movement.

Speaking of canoes in this context, Ross Mac commented on my previous post about King's Landing that his niece had, at one time, worked there, and that she had commuted by canoe to her job. What an absolutely idyllic 'commute', so far removed from the depressing experience most of us have as we journey to work. But, I must admit, I have had two good commutes in my working life - one involved a five minute stroll along a rough little road with no traffic and just a few cottages on either side, then up a little incline, through an old iron gate, passing under the most wonderful Spanish Chestnut tree, by a school cricket square and up some wooden steps into my school room, which had views of the Grampians.
Posted by AlFront at 15:27