The shape of things to come...

... no, not the over long and, sad to say, tedious novel by H.G. Wells (what was his editor doing? Just taking the cash?), but one of my three, going on four years old grandson's interests: 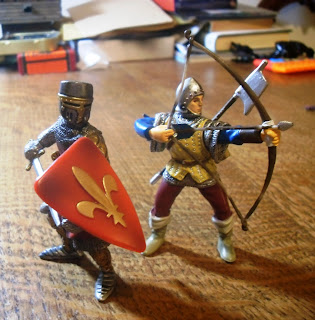 Knights and archers. He's had the bowman since the summer, and was much taken by the discovery that the 'axe' was, in fact, a bill hook. Today, he added the man at arms to his collection, and was pleased to learn about the fleur de lis . Somewhere, he also has a Crusading knight with a battle axe, and we must find him! The man at arms and the bowman spent a good part of the day floundering in 'Playdoh' - 'aaaargh, I'm sinking, hellllp, helllp!', but, occasionally triumphing on 'the battlements'. He isn't entirely sure what battlements are, but he knows they sound good.

But the medieval can also be combined with the modern: 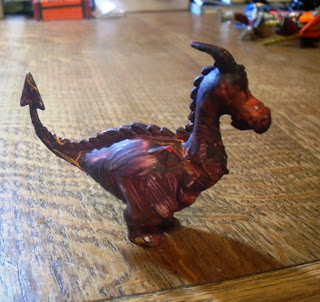 The little dragon above came unpainted but with a few tiny pots of acrylic. He is, in fact, a benign dragon called 'Sparky', who is good at cooking, has an indeterminate West Indian accent, and is one of 'Mike the Knight's' sidekicks. However, the boy wanted him to be fierce, so went for this purple mix - in a sort of modern disruptive pattern finish. That's the way! 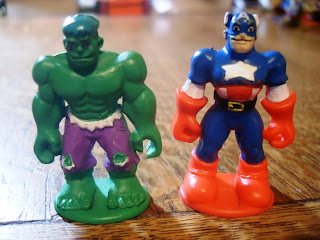 At last ! An Incredible Hulk!