'TANK T-34'. This little box, just over three inches in length was the product of the Soviet toy industry in the mid 1980s - the highly charged years of SS20s, Cruise Missiles, neutron bombs, the Campaign for Nuclear Disarmament's second wave. Oddly, one of that organisation's apparatchiks was the current, unelected, 'foreign minister' of the European Union - Baroness Ashton (for Americans reading this, her title was another stage in her unelected progress - raised to the House of Lords by her Party, the Labour Party).  Back then, in her unelected post as a CND funding apparatchik, she seemed, apparently, to be unaware that the KGB was channelling funds to the movement. I'm sure, of course, that it was just an oversight on her part, and that her lack of enthusiasm for free elections is no reflection on her or the EU. 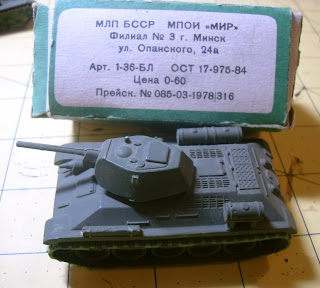 So, I have two options: scratch build an '85' turret, or go old school entirely, and just use it as it is.

I also dug out another Soviet toy, a T-26, also in 1:87, here with a much larger version from Empress: 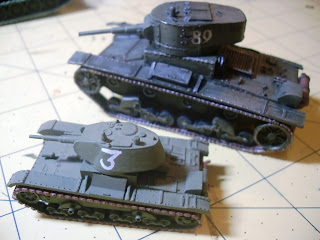 HAPPY NEW YEAR TO ONE AND ALL,
Peace and Good Modelling in 2013!