... and furious! Amazing stuff! And I thought Rapid Fire could give a bloody game. As you know, this was, for me, a test play of Too Fat Lardies' Through the Mud and the Blood. And as such I was only playing small forces, being inspired to use the rule set by the Triumphant Standards supplement. So, no artillery, no barrages, no tanks, bunkers, air support etc, just the Milice, the Resistance, and, perhaps a German armoured car plus paras in support. So how did it go? 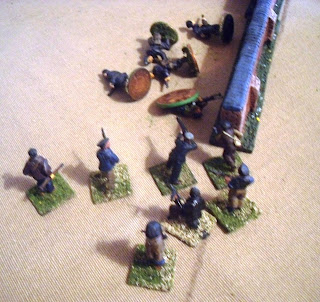 Having whittled down a Main of the Milice in a fire fight (see previous post), Hairy Pierre led his men in a very successful hand to hand with the enemy, killing all but one, who legged it. So far, so Resistance. 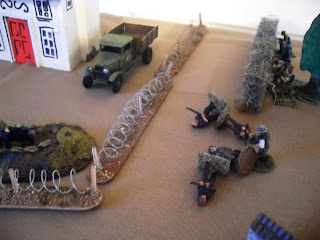 The cards seemed to have been going all the Resistants' way, and Felix decided to storm the HQ. A rash move, as inside, under the command of Big Man III, Le Chretien, was another Main, with LMG. And Le Chretien's card came up. Cue withering fire that killed all the attackers bar one. 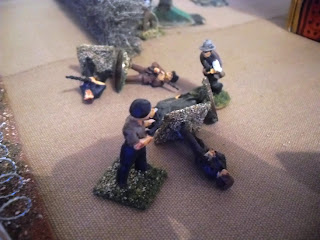 But to complete the moment, the next card was 'sentry', and the part-time Milicien sentry engaged the survivor with a close burst from his Sten. Goodbye Gaullist/Communist/bandit/whatever. 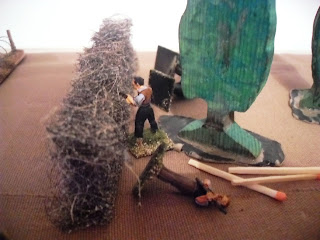 The Miliciens in the HQ then turned their attention to Petit Jo's boys sheltering behind the hedge line. Their fire had had little effect, as had the Resistance's LMG firing from across the main road. But the HQ boys made sure. 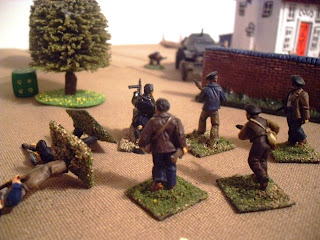 Hairy Pierre decided to push on, and led his men forwards, only for the next card to unleash the armoured car... 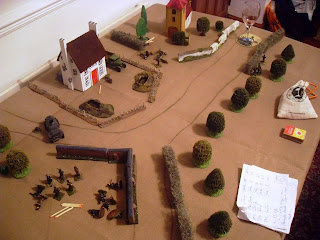 This was fast play, but enjoyable, and the card driven mechanism was ideal for solo play helping to reduce predictability and certainly raising the level of gaming 'friction', just as the authors intended.