... thousands of 'em ! Well, four sets of rules, actually, but I've been dithering to the point where it seems like 'faasands' of 'em. The question was, what was I going to use with these chaps: 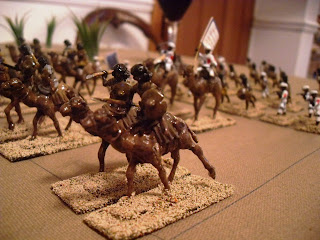 along with these stalwarts: 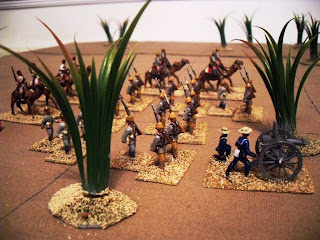 Last year I bought a set of Peter Pig's RFCM Patrols in the Desert. I've had some reasonable games in the past with RFCM's Bayonet and Ideology (odd title, which doesn't reflect the rules at all), and much better fun with Hammerin' Iron (first version). Given that history, I thought that Patrols might be worth a gander - and they are. The RFCM team came up with some very interesting ideas to give the Mad Mahdi's men all the benefit of playing on their home ground. That gives the British, Imperial and Egyptian forces tricky scouting tasks, and helps offset the benefits of training, discipline and fire power. But, after much thought, I decided that I couldn't expect a decent solo game with them. So, I turned to the classical model, in the shape of Morschauser's Frontier War. I'm quite a fan of the gridded concept which is just the ticket for a time short solo gamer, but the Frontier set lacks a certain dusty, gritty, deserty, hellish feel - in other words it would need some amendments and thought to make it more 'Sudan'. But Morschauser and gridded thoughts took me to the leading contemporary proponent of this approach - Bob Cordery, and his Redcoats and Dervishes. Mr. Cordery's rules look very nice, and there is plenty to think about in them, along with some useful scenarios. But I didn't feel like making a card set for the game; although I might in future. All that cogitation led me back to where I'd started from: 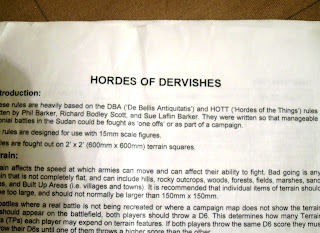 So, I've taken, in a random, haphazard fashion, ideas regarding random terrain generation, hidden Fuzzies (and pals), other bits and pieces from the different rule sets, and added them in to Hordes of Dervishes.

So, the old school terrain is set, the armies are counted out (24 Army Points apiece, as per Hordes), and tomorrow night I'll roll the dice: 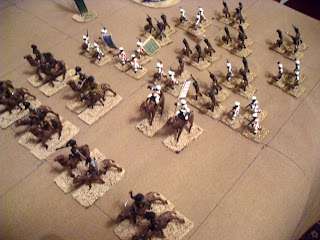 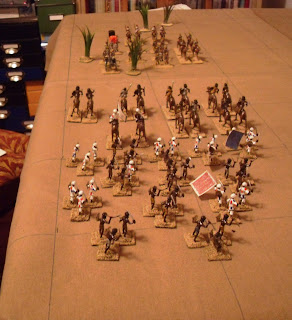