... finished! Well, nearly. After much unexpected fussing (the large number of tiny stencil decals took two sittings to get on, and they're almost invisible against the hellblau), the Arado looks, more or less, the way it should: 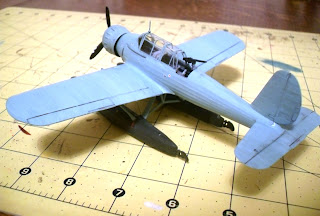 Given that it is supposed to represent an Arado embarked on a free-roaming auxiliary cruiser, I tried to make it look worn, but not too much, as I suspect that it would have been kept hidden for much of the time. 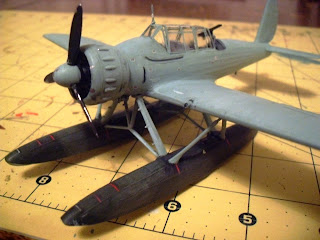 As you can see, the floats alone sported a range of tricky stencils, marking the danger area for the prop, and the contents of the various hatches - spare mg ammunition, rations, first aid kit etc. 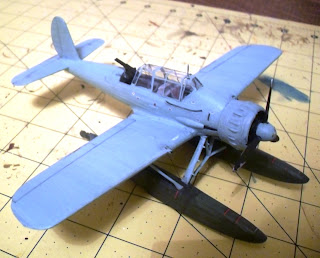 Not a bad looking kit for something so old. And I quite like the unusual overall blue finish, minus national markings.

The Skua is next up, but I think I'll have a quick foray into 42mm wargaming, as Ross Mac has recently posted some new rules - 'A Rattle of Dice'...
Posted by AlFront at 15:06