... 'Time, Gentlemen, please!'.  It's a long time since I was in the pub at closing time to hear the last orders bell, then the increasingly exasperated shout of ... 'Time, Gentlemen, please!'. Of course, pubs in England used to stop serving at 10.30 pm - which was a hangover from the licensing hours introduced during the Great War. The previously liberal laws were proving, under the pressure of inflated wartime industrial wage rates a bit too tempting for those Englishmen still at home, in war industries. The concern was that hung-over workers weren't pitching up for work, and were, in the later parlance of economists, choosing leisure over enhanced income. Now pubs are open at all hours, more or less (though not in my sleepy market town), thanks to the last Labour government - always the friend of big business profit, and the 'fat man, the very fat man who waters the worker's beer'. But what has this to do with anything kit bashing, toy soldier, wargames? Not a lot, except that I made the smallest of advances on my Arado this evening, and the fuselage is ready to be closed up: 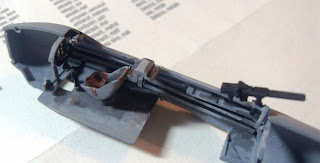 Geddit? 'Closed up', closing time? It's the way my random brain works. The photo above is a rather harsh image of what my Revell 1/72 Arado looks like. In reality, the contrasts are not nearly as harsh. Nonetheless, I have to admit that I do make the shading effects strong simply because in this scale, and through a cockpit cover, it is difficult to see much. Well, that's my excuse.

But if I haven't been sticking plastic together, painting little soldiers, or moving them around on the table top, just what have I been up to? Good old gardening and allotmenting. The Spring took a long time turning up here in Angles-Land, but it has, and we are glad. After a disappointing bulbs show, things have taken off in my tiny garden: 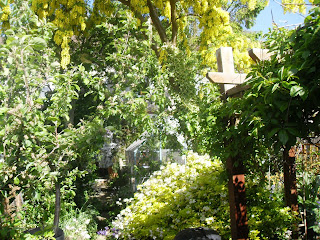 The view from the shed end of my patch - aaaaah, all good things. To sit here makes me feel thankful. To whom, or what,  I don't know, but I am thankful. The yellow stuff hanging down at the top of the photograph is: 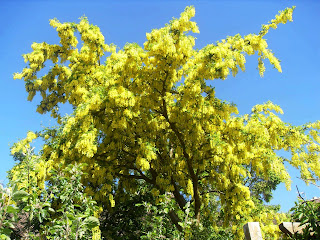 A marvellous old laburnum tree. When I took this garden over ten years ago, it was pretty barren - a dog's toilet crossed with a decking and sleepers mess. But there was this old laburnum. I'm not sure, but I suspect that this may have been planted by the first occupants of my home, in the 1930s. The tree was in fashion then  (gardening is even more fashion driven than the catwalks of Milan), and it is old, with a couple of dead trunks, as well as the existing main trunk. So this tree might well have presided over the house for 80 years. At the moment it is very noisy, as hundreds of bees feast themselves on its blossom - 'time, gentlemen, please' only when the blossom dies.

Below my various trees - lilac, apple, rowan - are a variety of plants, including these shade lovers: 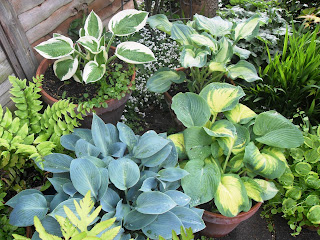 Hostas - beautiful, endlessly variable in colour, and, for me, reminiscent of my grandfather, George Jackson (1880-1973), ship's joiner, soldier (1915-1919), dog breeder, bird keeper, gardener, Home Guard (Mersey Docks and Harbour Board Home Guard), Englishman. He had hostas in his little terrace house backyard, in a street that also seemed to me, as a small child, to be full of other plants I have an affection for - elephants' ears, lilac, geranium, privet in boxes (the only way)... And the black steam trains ran behind the houses and alleys, fireboxes glowing in the dark, guard's vans streaming sparks from their stove pipes, while Canadian ships docked a few streets away with timber for the old country. All gone now. It's just a small bit of wasteland, there are no more goods trains for the marshalling yards, and the Roman Catholic church of St. James has its main doors nailed shut, and I have to carry my memory of lighting candles (despite my Protestantism) for my grandmother, who with her Welsh looks and the name of Rachel was taken for a Jewess by the tiny community of Jews that included her best friend who was wedded, in an arranged marriage, to a man 40 years older than her in the last years of the nineteenth century. 'Rachel, thou Jewish maid, you are wanted', said the tailor as Rachel's friend called to her in the street. All gone. England as an industrial country, with hard lives before modern (post-1945) medicine, but with proud men and women, stalwart and independent.

Meanwhile, the EU continues its dangerous habits. Not so long ago the UK Prime Minister made great play of a 'reduction' in the EU budget. Only it wasn't. It was a reduction in the intended increase that was still an increase on the previous EU tax raid on the nations of Europe. Notwithstanding this, the EU 'Parliament' (should it really be called a 'parlement'? - something different) began to think about a secret vote on (i.e., against) this 'reduction'. Uh? A parliament having a secret vote? I don't know what has/is happening with that, but I see that a committee of the EU parliament has had a secret vote that is expected to be rubber stamped by the full parliament. This one is to remove the parliamentary immunity from prosecution of the French MEP, Marine Le Pen so that she can be prosecuted for 'race hate' crimes for saying, in 2011, that the then frequent sight of Muslims praying in the street in France was similar to the Nazi occupation of France. Now that seems to me to be an odd thing to say, but, then, I'm not French. But, irrespective of what I, or anyone else, thinks of Marine Le Pen, the fact that a 'parliament' in a supposedly democratic system sees secret votes as being acceptable is quite horrifying. In fact, WTF!!
Posted by AlFront at 15:29