... slowly. It hasn't been much of a week on the toy soldier front. In fact, apart from some painting on the 1961 Cubans, which are a long way from completion, I haven't managed anything. However, the Me Bf 109 G-10 is getting there. It's nearly ready for the decals: 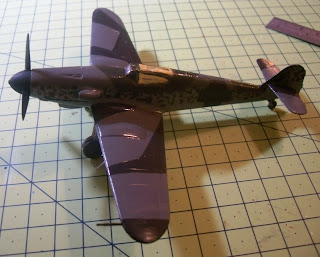 It is to be a very late fighter for the Aeronautica Nazionale Repubblicana's 2nd Sq. 1st Fighter Group in April 1945, hence the painted out fuselage cross, which will receive a small RSI tricolour. Nick Beale's Air War Italy 1944-45; The Axis Air Forces from the Liberation of Rome to the Surrender (1996) is an excellent account of the ANR's struggles, against German stupidity as well as the RAF and the USAF. Beale followed up that book with his account of Luftwaffe night attack operations in the theatre, Ghost Bombers; the Moonlight War of NSG9 (2001). 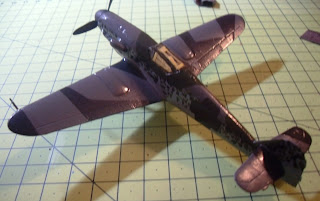 I doubt if I've got the various greys correct, but, it will look ok when it's finished. I hope.