... Rolls Royce engine. Uh? Just what did the UK government think it was up to? 'RR Nene, yes, of course, tovarish, and have some other products of our war winning aero-engine manufacturers while you are at it'. Oh well, it's all old hat now, ancient history. Odd, it was so  much part of our lives for what seem like aeons. But, it 'is one with Ninevah and Tyre!'.

Anyway, to see off flat fever (see previous posts), I've opted for an aircraft build. This has been sitting in my kit pile for six years, a Mig 15: 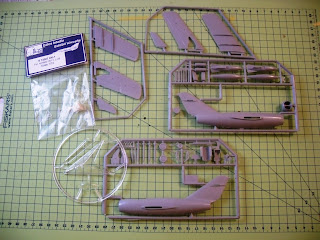 It's to be a basic kit bash, plus a little extra in the shape of a new resin ejector seat, and some after market decals. 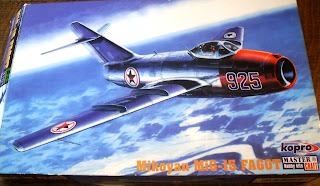 The kit is a 'Kopro' kit (not sure if the company is still about), with raised panel lines and noticeable rivets, so it will be interesting to see how it goes together.

The after market decals are related to the theme of this magazine from November 2006 (is it still around?  I haven't seen it in the newsagents recently): 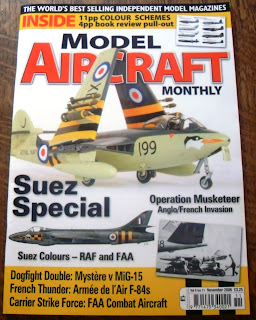 An interesting, well illustrated issue, with the Royal Navy and the French Navy still amounting to something. Carriers galore, aircraft and some more, ships aplenty. Yet the UK was a good deal less well off as a nation then than it is now. But there we go:

Far-called, our navies melt away;
On dune and headland sinks the fire:
Lo, all our pomp of yesterday
Is one with Ninevah and Tyre!

Yes, the old boy knew a thing or two, and ex-footballers nothwithstanding, there was a great deal more to his poetry than many give him credit for. But, that was a time when they could see what was shaping up for the century of horrors to come. Arnold did something similar with 'Dover Beach', and the squinty old Marxist nonsense (think Sartre) hardly proved to be a decent replacement.

On the soil front - ten bags of manure shifted into a trench, runner beans added. Around 70 leeks planted out, plus three rows of carrots. It still rains.