As well as toy soldier painting, walking, church hunting, pillbox ferreting etc, I also browsed a book shop or two on my holiday. Burnham Market boasts a very good second-hand bookshop that, a few years ago, provided me with a nice little cache of books about the American Revolution. They dated from around the US bicentenary, and I suspect a now deceased enthusiast had them in his library; who knows, he may have been a wargamer and used Airfix's still rather fine AWI sets - remember the wounded man being helped by his comrades, and the barrel carrier ? This time, I picked through the shelves, looking for the odd, the unusual, the unjustly forgotten, and came across this very slim volume, instantly recognisable as wartime standard production: 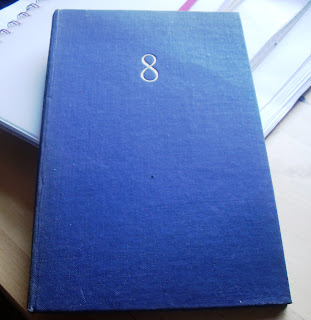 Published in May 1944 by George Harrap & Co. Ltd., it is Poems from the Desert; verses by members of the Eighth Army, and was, I thought, a snip, at £3. Especially when I turned a few pages in and saw: 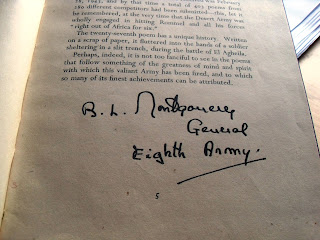 Yes, Monty's mark, in all probability a month before the invasion of (western) Europe. Montgomery has a particular status here in Warwickshire, due to his connection with the now disbanded county regiment (the old 6th Foot). In fact, the departmental secretary at my place of work boasted a grandfather who was Montgomery's batman in the 1930s. Montgomery was, of course, far from being a retiring sort of fellow, was quick to steal other's thunder, and made some very bad mistakes, as well as some good calls. But, then. I wasn't there, and am just a scribbler.

My second find was this: 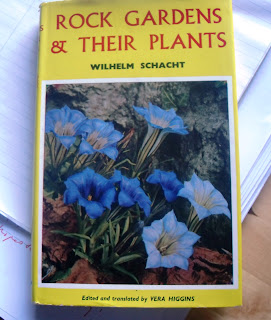 Originally published in 1960, and in English in 1963, it is the work of Herr Doktor Wilhelm Schacht, erstwhile gardener to Tsar Boris of Bulgaria, and the book is full of references to the gardening work of men with marvellous names - Kerner von Marilaun am Innsbruck, Herr Doktor A. Hruska; and Herr Doktor Rosenstingl-Gmunden. These botanists are surely the creatures of an 18th Century Imagi-nation.