... our dim politicians struggle to think of what on earth they could do next, bankers struggle to keep the rest of us on our knees, Merkel struggles to be a bureaucratic Karl der Grosse, M. Hollande struggles with his mini-harem (or they with him - good job the top Frenchies have got their priorities right), and the Greeks just struggle. And I struggle to crack this flat painting malarkey: 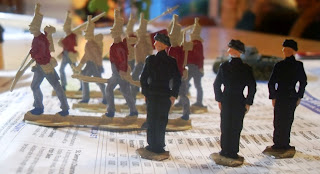 Some work in progress. In the foreground, three members of the Panzerwaffe c.1940. I've had these since 1984, but they needed repainting because I had originally done them with camo overalls, despite their early war floppy berets (!!). The difficulty, of course, is painting black on these flats. Just the basecoat at the moment, but the only way forward that I can see is exaggerated highlighting. I think this just might be the general answer, and the War of 1812 British in the background have had the block colours highlighted much more than I would do with round figures. If you click on the image to enlarge it, the highlighting is a bit more apparent, but I may well have to be even more heavy handed.

But away from the struggles of high politics and flat painting, sanity can still be found in my Hobbit hole: 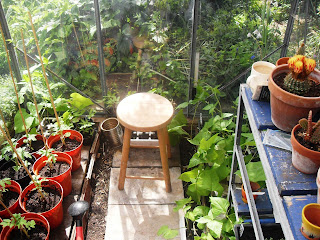 A brief bit of early morning sun warming my tiny greenhouse, where I smoked a pipe of London Mixture, and drank coffee.
'Time grows young in a garden'.