... post. Even as I typed the final words of my last post - over a week ago - I realised that I was tempting fate. Of course, a week and more later, and ... I haven't made any advance at all on my DBA project. Well, not unless peering at Donnington's 'New Era' range of 15mm Dark Ages fellows counts. What is worse, I can't remember how I had intended to organise my two armies - late English and Dane -and the DBA army list only seems to offer mid-Anglo-Saxons and their rivals. Why is this ? Does anyone know? And does anyone have a DBA list for late English ?

Despite the utter failure on the toy soldier front, I have made advances in the Alps (or Pyrenees, or Dolomites, or Tatra mountains, or wherever) on my minute bit of the West Midland plain. Faithful readers will remember that I was inspired by my holiday purchase of Wilhelm Schacht's Rock Gardens & Their Plants (1963). This coincided with holiday purchases of plants like this: 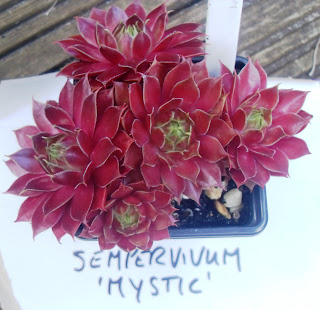 This marvellous plant (a favourite with the High Victorians) joined similar fellows in shallow pots soon after my return from the ancient home of the North Folk. But, of course, one thing led to another. First I bought Jim Jermyn's terrific text, Alpine Plants of Europe; a gardener's guide (2005), which I have been reading over breakfast each morning in the sort of bemused, scarce comprehending way that I first read economics' text books at university. I learnt then that, as Ezra Pound said of his poetry, 'if you don't underrstand the dam' stuff, jist read on' , because, in the end, the general direction becomes clear. Jermyn determined me to find some space for a raised bed, and I turned my eye to my much-hated block paved front 'garden'. I hasten to add that the garden was levelled and (very efficiently) block paved by the house's previous owners. Sadly, the narrow little 1930s terraced street I live in is also overflowing with cars, and our own, increasingly battered, Mondeo, just about squeezes onto the paving. A Mondeo - ha! How many people remember that unspeakable swine Tony Blair wittering on about 'Mondeo Man' in 1997? Well, here's one 'Mondeo Man' who wishes him ill fortune, and a suitably Shakespearean end.

But back to my raised bed: 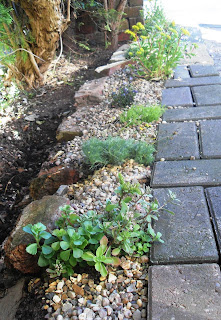 I dug up one side of the block paved nightmare, cleared out the soggy mess underneath down to the builder's rubble (Alpine heaven!), used the excavated blocks for the dry stone wall, added farmyard manure (3 year old grandson: 'Can I smell?' 'Eeeeeugh, dis-gusting!'), then John Innes no:2 plus sharp sand (see, you can recognise the odd similarity with modelling), plants in, gravel added: 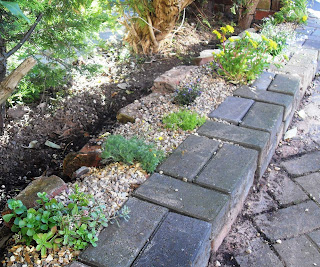 The rear wall is made of odd bits of brick and concrete salvaged from the alleys that run behind the houses, so, all in all, a reasonable cheap attempt. My only worry now is that this bit of space doesn't get much direct sun .... but, let us see.

And, to complete the similarities with wargaming, toy soldiers and modelling, I took delivery of another Alpine book today - Reginald Farrer's Among the Hills (1911).

Was it Miles Kingston who had the column that ran along the lines of, 'there are those people who are enthusiasts, and those that aren't' ?