... and the Sea.  A title of a book of oddments by Hilaire Belloc, a man forever nostalgic about the loss of the Roman Empire in the West. But also a description of a landscape that I love. Yesterday, I had a trip to a bit of Britain that encapsulates the loss of Christian Rome and hills and the sea - west Wales. On my maternal grandmother's side my family comes from Wales, from Llwyncelyn in Ceredigion. Celtic Welsh speakers who sheltered behind mountains after the fall of late Roman Britain, Christian Britain, to the invading pagan Saxons. Who, of course, went on to become Christians, and the English - creating my homeland of England. Travelling westwards yesterday, from the heart of Mercia, we stopped just before the English-Welsh border for tea, and listened to local, Herefordshire accents - rich, English accents. Within a few miles that had changed; then beyond the hills, Welsh speakers everywhere, and different faces - rounder, heavier set, with a sprinkling of blue eyed, sharp nosed Viking, reminding us that the Viking raiding Kingdom of the Isle of Man wasn't that far away in the Irish Sea. This part of Ceredigion had a feeling of ethnic permanence, and that was pleasing. Because such things are, like the natural ecology of the world, fragile. My grandmother's parents were native Welsh speakers, and she was able to swear profusely in Welsh, but my mother cannot speak a word of the language. Similarly, my late father and mother in law were native Gaelic speakers, but my wife speaks just a handful of words. Fortunately, for me, the other three quarters of my background is English - Derbyshire, Lancashire, Cheshire, Durham - so I speak the language of most of my forefathers. But language and culture can be gone in a generation or two. The supporting environment of people can quickly fall away - whether it be the built environment (vernacular architectural styles, which are so noticeable as one drives through the country, fall to 'off the board' standards of cheap mass produced building) or the organic cultural growth of generations (the visual media is quick to destroy that). And peoples are replaced - driven away, or simply elbowed out. And it doesn't have to be by armed invasion, which is clear cut, and can be defended against. There were memories of such defence in Ceredgion too, with a very well preserved pill box catching my eye on a hill overlooking the sea: 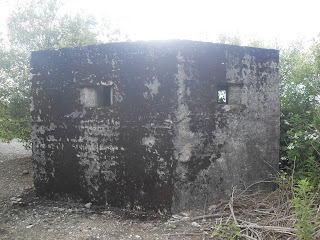 In a remote spot, surrounded on three sides by self-sown trees, this pillbox was unadornded with graffiti, undamaged, except for the loss of the wooden firing platforms inside, and had not been used as a urinal. It squatted, half-hidden, looking across sloping fields, watching, waiting, empty.

Sticking to these themes, I finally managed to finish my first two DBA armies. Here are my late Anglo-Saxons/English -shieldwall ready to repulse the invader: 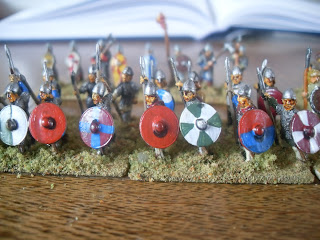 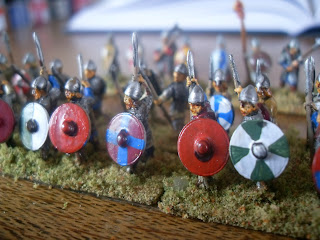 Next step in the project is a dedicated DBA playing area. I've got the MDF, and some green paint, so it won't be long (he said...)
Posted by AlFront at 03:46