I was off to Londinium today, and will be tomorrow, but I was greatly comforted by Simcoe's Military Journal: a History of the Operations of a Partisan Corps, called The Queen's Rangers, Commanded by Lieutenant-Colonel J.G. Simcoe, During the War of the American Revolution, which seemed an apposite read a day after the 4th July. As dedicated readers of this blog may remember, I bought this journal in March but was then distracted by the Duke of Tradgardland's reading suggestions re the Austro-Hungarian Empire in the Great War. But I was very glad I took Simcoe with me today, and was able to escape into the late 18th Century as all around me peered at i-pads, kindles, i-phones, blackberries and all the other anti-human trash of our present age. Simcoe's journal is both a fascinating account of light infantry actions and a profoundly human memoir. I was interested to read how closely the Queen's Rangers, and other Loyalist corps - such as the British Legion - worked with the 'Yagers' (sic), a formidable co-operation between skilled woodsmen from Europe and Loyal Americans: 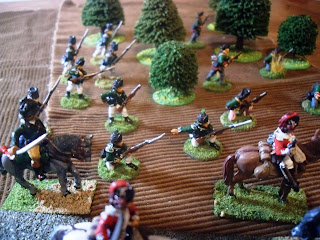 Queen's Rangers, horse and foot, and Jaegers are well represented in my own forces, and a small part are shown here... 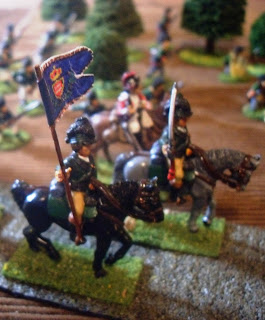 ... along with 17th Dragoons, who also worked with these men. 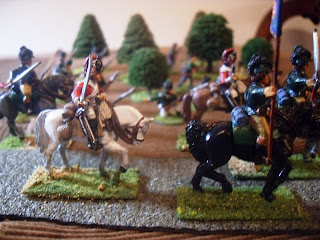 Of Simcoe's humanity, let me quote from an account of a bloody night attack that included unintended deaths:

'The surprise was complete, and would have been so, had the whole of the enemy's force been present, but, fortunately for them, they had quitted it [Hancock's house] the evening before, leaving a detachment of twenty or thirty men, all of whom were killed. Some very unfortunate circumstances happened here. Among the killed was a friend of Government, then a prisoner with the rebels, old Hancock, the owner of the house, and his brother: Major Simcoe had made particular enquiry, and was informed that he did not live at home, since the rebels had occupied the bridge. The information was partly true; he was not there in the daytime, but unfortunately returned home at night: events like these are the real miseries of war.'

Of these Loyal Americans little is known now in Britain. Of course, English-speaking Canada is, in large part, their memorial, but, it is sad that in Britain there is no memorial to them. I have seen a plaque on a house in Beverley, Yorkshire, that mentions a Loyalist officer refugee, and I think that Simcoe is remembered in one of our Cathedrals, but there is no national memorial. But they are not alone in that...

'Some few of the Rangers were wounded, among whom, Sergeant M'Pherson of the grenadiers died; in every respect he was much to be lamented.'