... and a day with the English. One of the great advantages of being responsible for a small boy (grandson, aged three and a half), is that anything involving old, large, industrial, agricultural or transport machines is firmly on the 'must see' agenda. So, today, we were off to the heart of Northamptonshire, which I once heard was 'a gentleman's county', to see things like this: 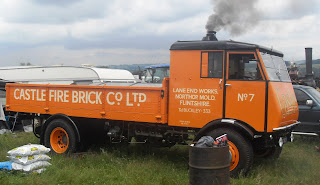 A splendid steam lorry. Britain was quite unusual in that steam lorries were much in evidence on our roads until the late 1930s, only really being killed off by the war. The event where this beautiful orange machine was drifting out its oily coal smoke is billed as a steam traction engine show, but other classic pieces of largely British automotive history were on display - tractors, fire engines, breakdown trucks, all that a small boy could wish for. There were plenty of oddments too, including this workmen's hut: 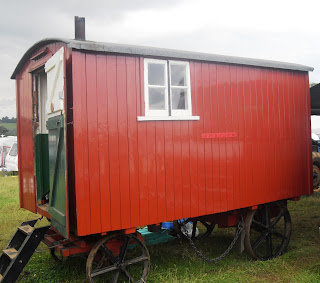 I recently saw an advert for a new build 'shepherd's hut' version of this - it would set one back by £8,000, for the basic model.

One of the things that strikes one about these sort of events, is that they seem to encapsulate the spirit of the enthusiast, the volunteer, and the self-organisers. The late anarchist writer, Colin Ward, built much of his theory around what he saw as the daily anarchism of people, organising things for themselves, without any state intervention. I am probably wrong in this, but these sort of events - organised entirely by volunteers, with all the proceeds going to charity, and giving enthusiasts the chance to show off what they love - seem to encapsulate something about the English (although, I suspect Americans are, in their way, similar). The steam event involved all sorts of voluntary bodies, private traders selling the oddest range of bits and pieces, charities, and the people who restore and exhibit the vehicles. The whole thing took place in a huge, very wet field overlooking some marvellous, rolling Northamptonshire countryside. People seemed happy just to wander around, squelching through the mud, looking at the exhibits. And despite the terrible weather, there were plenty of people who had turned up, almost all (probably over 99%) ethnically English. It wasn't sophisticated, it wasn't 'modern', it wasn't metropolitan. David Cameron, Nick Clegg, and Ed Miliband would never be seen in such a place, neither would their dinner party guests. I doubt if one single English person at the event has any time for any of them, or their ilk. The 'disconnect' couldn't be greater.

I haven't had much modelling time lately, but the disaster that is the Mig 15 nears completion. The current state of play is: 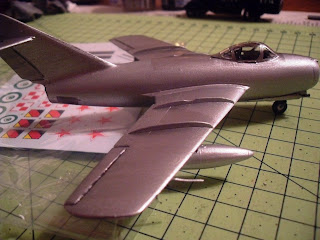 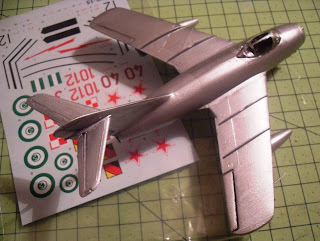 The photos are, sadly, somewhat flattering.