At last, 'the Bat' begins to take shape. The 'Supermodel' kit is an old one, around 40 years old, but appears to me to be a basically sound kit. Nonetheless, 'things ain't wot they used to be' (a tune supposedly played by the last military band as the British Army left Aden not long before the kit was made), so I have to make some concessions to modernity:

There are a goodly number of openings in the fuselage that will reveal the innards of the bat, so the photograph above shows the beginnings of my rudimentary attempts to make the inside a bit busier. The SM81 had a dual role from the outset as both bomber and transport, so, happily, I didn't have to attempt a representation of the bomb bay, with its unusual vertical cages for the bombs.

The next issue was the dreaded question of the raised panel lines: 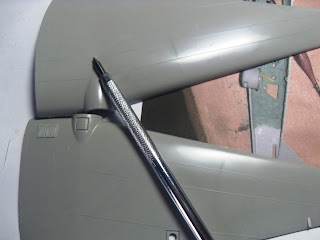 I have bits and pieces, here and there, about the Pipistrello, but this other oldie: 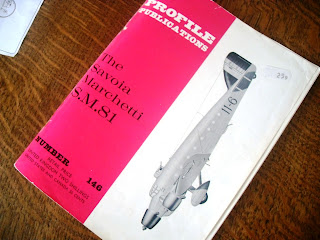 is a great source. The SM81 was outdated by the time Italy, stupidly, entered the war, but when it first flew in 1934, it was well up among the European leaders. Compared, for example, with the Bristol Bombay, which first flew in June 1935, and had a similar transport/bomber role, the SM81 was faster, better armed, and had a greater range. And although both types saw active service in the war, the Pipstrello managed to contribute up until 1944.

Thinking about last tunes, I read not so long ago that the playing of 'The World Turned Upside Down' by the last British Army band out of the newly emerged USA looks, sadly, to be yet another myth. Oh well.