... or, as the connoisseurs would have it, 'classic plastic': 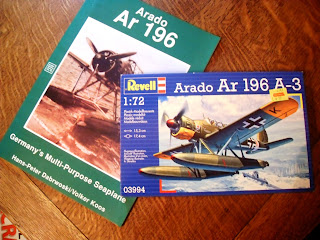 I don't know how old the moulds of this Revell kit of the Arado 196 are, but they bear all the hallmarks of the early 1970s - raised panel lines, masses of ejector pin marks in the wrong places (i.e., where they can be seen when the model is complete), thick plastic all round, and ghostly halos of flash. But the Arado 196 was a tough aircraft (only bettered by some of the Japanese types - though check this account of German engineering versus Japanese bodging), and I'm hoping it will look fine on my kit bashed shelves. I decided not to rescribe the panel lines (I want to finish something - it's been a poor year on the toy front here in the Hobbit bunker), but rubbed them down to make them a little less obvious. I've also added in a few longerons  for the cockpit: 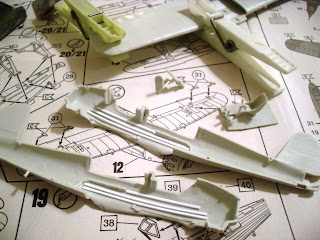 It's all curing at the moment, but I've actually started something that I might finish!

Also on the classic plastic front: 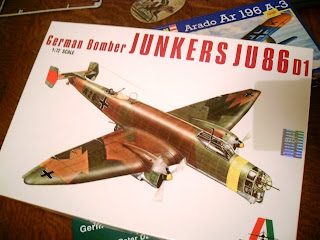 An Italeri re-release, specifically marketed as from the 'Vintage Collection' - i.e., will only appeal to old beggars like myself. I snapped it up when I saw it, thinking that I'd finish it as a South African Air Force Ju86 for the East African campaign. But, once I had it, I went back to my sources and discovered that the SAAF Ju86s weren't the diesel engined version in the Italeri kit, and/or were actually converted civilian airliners. For one I'd need radial engines, while for the other I would need to do a lot of window cutting in the fuselage. Mmmm, return to the planning drawing board.

Also on the theme of old stuff. It is a bank holiday weekend here in England, and, happily, it looks as if the grey, wet weather has gone, for the moment. I was in Warwick town market place this morning, the sun shining, the Warwickians wandering around the market, drinking tea and coffee, smoking, chatting. Many of those Warwickians, especially, I suspect, the poorest, will be the current representatives of the Anglo-Saxons who first built the place - as part of the defence line against the Dane. The sky was blue blue, with cumulus clouds. I sat my grandson on one of the high window ledges of the old Post Office (a Victorian building that reflects the old status of the Royal Mail - an organisation run on semi-military lines in the 19th Century, such was its importance), and we talked of this and that. Fifty yards away the dramatic, elegant, Protestant church tower of St. Mary's basked in the sunshine, with the medieval, Catholic, knights and ladies lying in their own dust in the tombs of the Beauchamp chapel, and the commoners sleeping the long sleep outside in the church yard. I wonder if they will climb out, as in a Stanley Spencer painting (Spencer that great English artist, not Spencer the great English poet), transfigured. 'In the sure and certain knowledge...'