At last, I have had the chance to add a little more paint to my Upper Canada Militia. I am still at the block painting stage with these fellows, but in the unusual colours of blue 'trowsers' [sic] and green short jackets, a result of the shortages in Canada as it faced the aggression of the Imperial Republic, still at the early stages of its expansionism: 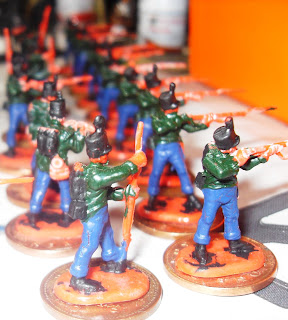 These fellows are the rather neat Hat Peninsular ﻿War British infantry, of the pre-Belgic shako period. When finished they will join their brothers in arms from the Upper Canada Sedentary (now we're talking!) Militia in their civvvies, with rather fetching 'round hats', Lower Canada Select Embodied Militia (Vive le Roi!!), and some regulars, seen here in their 'barracks': 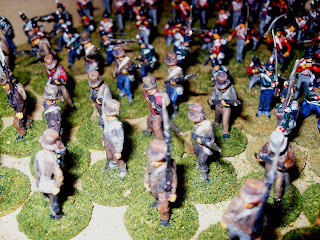 Until recently, I have relied on three Ospreys for the period, one, British Forces in North America, 1793-1815, by the prolific, and rather marvellous, Rene Chartrand, illustrated by Embleton pere. 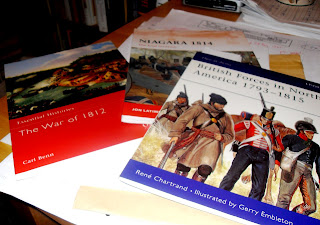 Chartrand is incredibly learned in the military history of North America, and his barbed asides (thrusting into the thick historical hides of the partisans of that most infamous revolution against His late Majesty, George) enliven his many Ospreys. Imagine my delight recently when I discovered that last year he published what must be the authoritative account of British and Canadian forces in the War of 1812: 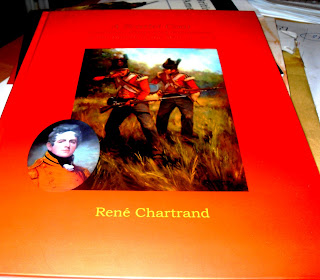 This - A Scarlet Coat: Uniforms, Flags and Equipment of the British in the War of 1812 (Ottawa, Service Publications, October 2011) - is a wonderful book, and an absolute must for the enthusiast of 1812. It is pricey, and only available from Canada or the United States, but how pleased I am that I have a copy. And for those who wish to read of the aggressors, M. Chartrand has also penned a matching volume on the blue coats.
Posted by AlFront at 15:42