By way of an introduction...

Yes, another blog. We live in strange times. Now we desire to combine the graffiti writing urges of old Pompey with the diary introspection of Pepys (or, in some cases, the depravity of 'Walter') in the form of the blog. And I am struck by the same desire. As usual with desires we can always blame others, so I blame the marvellous wargame blogs of Officer Kinch, His Grace, the Duke of Tradgardland, the noble Ross Mac, and our brother in Christ, the Padre. These are exemplary wargames blogs, and I can only hope to strive for such entertaining perfection.

Like many wargamers, I seek not to replicate war, but to indulge in a harmless past-time, find an escape from daily life (known to me as 'the diurnals'), and bathe in nostalgia. Among the odd memories of half a century, that of opening a Christmas day gift of a tin of size 2 Humbrol gloss royal blue (for a packet of Airfix Waterloo French) remains clear, when much else is lost. And the figures that I have painted, organised, admired, and occasionally gamed with also remain fresh in my mind's eye. They still have purchase too, as only the other day I picked up, in my grandson's house, a 54mm plastic Napoleonic Prussian and said to my wife, 'I painted this chap 40 years ago', to which my three old grandson said, 'And now he is in Toby's house!'. There may be 'no continuing city' for us mortals, but the little plastic and tin fellows have some immortality. So, these are the sources of my 'War Diaries'.

As for 'Little Englander', well, it reflects the little of the hobby, but also me as a Hobbit-like Englishman (no trade mark infringements intended - and I care not in any case, the globalisers can get lost). I am a middle-aged, pipe-smoking, grumpy, Englishman with an allotment, and apple trees in a tiny garden. I like the small, the local, the vernacular, the undemonstrative. Speaking of which, I recently returned from Denmark, a country that exhibits these virtues. Strikingly, to English eyes, Danes are happy with their national lot, and unabashed about their quiet patriotism. The Danebrog flies everywhere, here at the Royal Danish Navy base in Copenhagen: 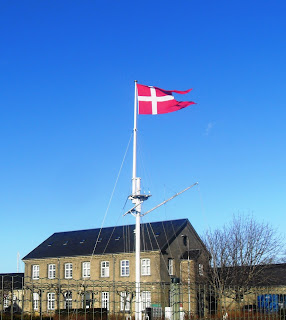 And in the summer months the Danebrog flies everywhere over the perfect allotment huts of the Danes, which are far more orderley and well-constructed than our own allotment huts of old doors and palletts. It was, in fact, the example of the Denmark that led me to fly the English flag over my own few square feet of England.

So, a blog of toy soldiers, a blog of odd thoughts. Greetings!
Posted by AlFront at 08:41