A welcome parcel from the postwoman

Every so often, one comes across a book that raises one's hopes of happy hours of reading. It is wise not to allow oneself to be too optimistic, but hope springs... And I think I have found a book, new to me (and how have I reached such an advanced age without finding it before?) that will match my expectations and hopes. Originally published, in a private edition, in 1787 as Simcoe's Military Journal; a History of the Operations of a Partisan Corps, called The Queen's Rangers, Commanded by Lieutenant-Colonel J. G. Simcoe, During the War of the American Revolution; now published as: 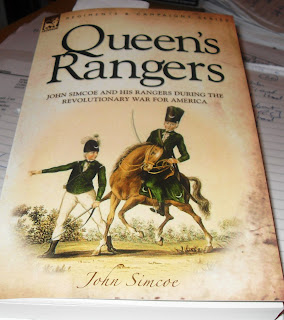 I have only, as yet, dipped into Simcoe's memoir (the diurnals again - damn'd skirting boards, door frames etc), but it looks to be a delight. It is from that Enlightenment-influenced period when our ancestors appear before us as very much like ourselves, or we, like them. Happy hours beckon. And my 28mm Queen's Rangers will have to be drawn up in review, horse, foot and battalion guns.

A word about the current publishers of Simcoe's journal. They are a print on demand company called Leonaur, and their list contans many military gems, my favourite being Faraway Campaign; Experiences of an Indian Army Cavalry Officer in Persia and Russia During the Great War, by one F. James, about whom I have been able to find out nothing more than he told in his memoir. But what a memoir! Faraway Campaign is the finest ripping yarn I have ever read, and if it doesn't have you reaching for Copplestone's 'Back of Beyond' figures, then nothing will.
Posted by AlFront at 16:58