Another beautiful early spring day, another busy weekend day. Planting bedding plants in my aged mother's garden, planting alpines in odd, stony parts of my garden, scrubbing the quarry tiles in the hall, then painting on a sheen to welcome in the spring. Finally, down to my plot on the allotment, for an hour's digging, and planting more broad beans (aquadulce). One of the marvellous things about working the soil on the allotment, which lies on the ancient road into what was the walled town, and between those transformers of the world - the canal and the railway - is the constant turning up of: 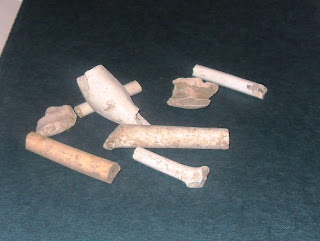 echoes of the past. No, not the bones of our forefathers, but their clay pipes. Some will have been thrown away, broken, by men and women working the fields, but there is such a large number on the allotment that I suspect that many of these artefacts found their way there via farmyard middens. Broken pipes would have been thrown onto the dung heap, along with all sorts of animal, mineral and vegetable, then to be spread on the field which is (all hail Henry George) now a town allotment. The bowl above (a rare, intact, find, normally only stems survive) is a bit of a puzzle. According to Eric G. Ayto's categorisation of English clays, it could be an 18th Century pipe. I like this idea, a clay as smoked by: 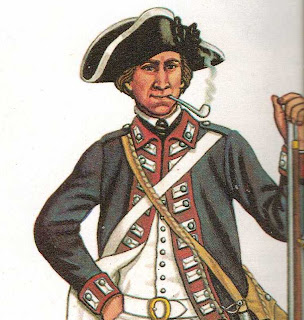 This bold fellow is one of Newfoundland's stalwarts, defending that territory from the rebels throughout the late war in America (taken from Philip Katcher's Armies of the American Wars, 1753-1815 - a much loved book). However, it may be that the bowl is of the Dutch style, c.1850-1910, copied by some English makers. In which case, a clay smoked by men like these: 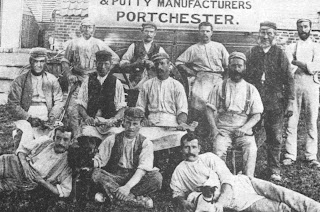 'Tobacco Pipe, Whiting & Putty Manufacturers' of 'Leigh & Co, Porchester' (from Ayto, p.13). Men like my grandfather, a time-served ship's joiner. But, whatever, and whoever, they would concur: 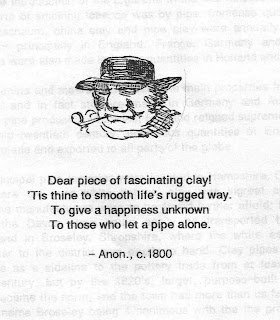 From A.J. Mugridge's self-published The Clay Tobacco Pipe, Telford, 1997, who also made the clay, decorated with a relief of the Manchester Ship Canal, that I occasionally smoke. On a happy day, by the River Severn (from where the Industrial Revolution swam out into the world), I bought clay and booklet from Mr. Mugridge, and rejoiced in the skills of enthusiasts.
Posted by AlFront at 15:44