Today was perfection in little England, well, in the small county town of Warwick, where I live. Surprisingly warm for this time of year, making the Magnolia trees look tardy, while daffodils, tulips and winter sown broad beans are really into their stride. Warwick has a Saturday market, and the English wander, shop and buy food, tools, and items of working clothes, much as they have done since the town was founded as a defence against the Danes. The sun shone, and the old, the halt, the lame, the young, toddlers and babes in arms enjoyed the warmth. The County Court is now empty, replaced in the latter stages of New Labour's (Neue Arbeit ?) rule by an American-style 'Justice Centre', but the Cross of St. George (also that of Christ Resurrected) lay as usual against its flag pole on top of the fine tower of St. Mary's, Warwick's glory, and visible for miles around. For a country and a people that are often deemed not to exist (especially by the metropolitan, globalising, power elites - to be seen later this year in all their hubris at the parody of an ancient ideal, the Olympics) we are still here, in all our Hobbit-like, particularly English quietness. We have divested ourselves of our Empire (strange that the English had such a schizophrenic personality, small, local, but expansionist and worldwide - was it the Norman virus that caused it?), and it may be that in a few years, an old-ish wing of the house that we live in will leave. That was a 'long song', but England will still be here. We have new changes to grapple with - social, ethnic, political, religious, demographic, and economic - but, always, somewhere, there will be 'old Mus Hobden'. I shall go into my little garden now, admire its reborn greeness, smoke a pipe, and smile at my grandson's reply to my telling him that flags outside a Leamington pub were Irish ones: 'but I am English, and daddy is, and mummy, and grandad, and granny'. Granny is a Scot, and there is Irish and Welsh in the little fellow, 'but I am English': 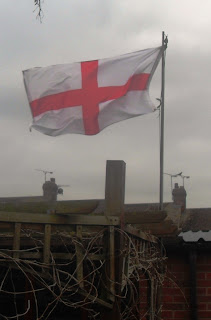