A few posts ago I featured some of Tony Burley's Anglo-Egyptian Boy Scouts in 54mm. That reminded me that I had not completed my Sudan project in 20mm. So, I have excavated the figures, and found, to my pleasure, that my Anglo-Egyptian forces exist in sufficient numbers to play a game. Here they are in their barracks: 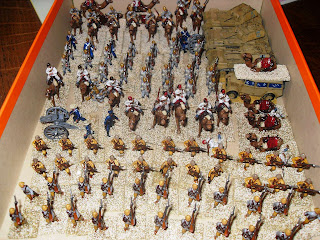 They are a mixture of Hat and Jacklex (from Peter at Spencer Smith, of course). Needless to say, the anachronistic A13s and staff car in the top right hand corner do not belong to the force.
On the Dervish side, I have nice force of spearmen, cameleers, and riflemen, based, undercoated and ready to be finished: 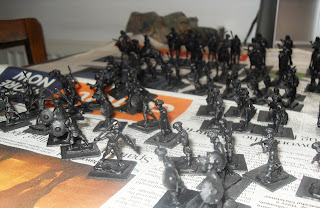 I will finish them off soon! In fact, as soon as I have blogged I will get cracking.
As for rules, I have a copy of Peter Pig/RFCM's 'Patrols in the Sudan'. I have frequently used their 'Bayonet and Ideology' rules for 15mm and 20mm Spanish Civil War, and while they give a good game, I'm not sure they capture the political aspects, often linked to military ability and effectiveness, of the conflict. I've also used the first edition 'Hammerin' Iron' (the American War of the States, riverine set), which makes for an excellent game to match the very nice ships for the period produced by Mr. Pig. So, I will be interested to see how 'Patrols in the Sudan' plays. Looking at the rules, a great deal of thought has clearly gone into the terrain question, giving the Dervishes the sort of edge they need, and had. 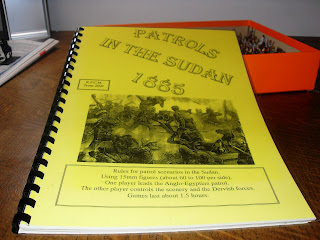 On the tobacco front, I've decided that 'Charles Mixture' is a pretty decent smoke.
Posted by AlFront at 13:58