'but it is madness!'

Advice that almost all of us ignore, even though it comes from one of our holy texts:
'If you are enormously rich and have plenty of room, you may be tempted to build up war game Armies of several periods. This is enticing, but it is madness!', Brig. P. Young & Lt. Col. J.P. Lawford, Charge! Or How To Play War Games, (1986, Athena edition, p.116). These words whisper to me at every turn, but I am struck by the disease whose first manifestation is the sensation 'ooooh, shiny!': 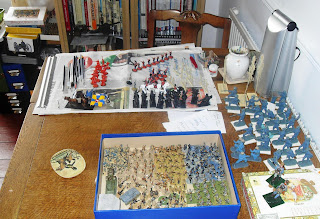 Above is a photograph of my dining room table. Not that I have a dining room, just 'a room' downstairs - so I don't pass the 'plenty of room' test. I had taken out the blue document drawer to look at over breakfast. Why? Because it is labelled 'Holland, 1940, 20mm', and I recently realised that Early War Minuatures have a range of Dutch for 1940... 'ooooh, matt'. The drawer does, indeed, contain Dutch marines and Dutch infantry, and 1940 German paras, but it also contains 20mm Tumbling Dice 1914 Germans, 20mm Who Knows (an e-bay purchase) early British commandos, 20mm Britannia 8th Army in the desert, 20mm Italeri Folgore paras for El Alamein, and a 15mm Peter Pig Panzer II. Worse, the cigar box contains pre-Dreadnoughts from France and Italy, the box itself being assailed by Armies in Plastic FLW project 'Army Black'. While on the newspaper rest part of my War of 1812 project - Upper Canada embodied militia in 20mm plastic, but, also, the ghostly forms of 30mm Zinnfiguren flats, not to mention some Perry AWI British dragoons, and AWI flags. While, off table, a packet of British colonial gatling guns glare at me - part of a half-finished Suden project.
It is madness .... but not a fraction as mad as the 'real' world...
Posted by AlFront at 04:41