Tim Gow, over on his Megablitz And More blog, has given us a very nice display of 1/144 Romanian air power from the Second World War, which featured a remarkable mixture of types from practically every aircraft manufacturing country in Europe. Denes Bernad's Rumanian Air Force; the Prime Decade, 1938-1947 is a must for aero-enthusiasts with a love of the outre, but, be warned, it might lead to a sudden desire to abandon the little men for nasty-smelling glue and the horrors of sanding off too much surface detail. Tim's comments about his need of some ground forces to match his air cover, sent me to my (unfinished!) Crimea project: 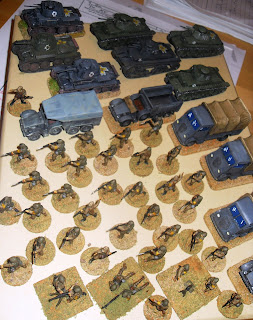 These are some of Hat's excellent 20mm Romanians (they come in one of Hat's much appreciated 96 figure boxes), while the armour is a mix of Frontline, Minimi and Fujimi (the latter from 28 years ago, which just goes to show that things do come in handy if one waits long enough), while the trucks and Krupps come from Minimi and Matchbox. The whole lot was supposed to be a Rapid Fire division - the 1st Armoured Division. I think the Romanians only managed to put together two, which, for a country that was poorer than Turkey in the 1930s was something of a feat. Now, I do have plenty of Red Army types, so I really should have a game....
P.S., for those of you of a literary bent, Olivia Manning's Balkan Trilogy -The Great Fortune, The Spoilt City, and Friends and Heroes - is a must for the period leading up to Romania's entry into the war, though some of the feeble, self-absorbed characters grate after a while, but that's literature!
Posted by AlFront at 12:56