I have a penchant...

... a penchant for militia units, second line troops, garrison chaps, Corps of Invalids, volunteers. It was that, I suppose, that led me, after many years, to write my history of Britain's Home Guard. But it also affects my troop raising: 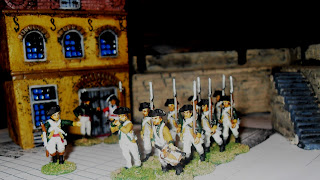 Here we see some stout fellows, Loyal to His Majesty, garrisoning New York, some time after the liberation of that city from rebels in the Fall of 1776. In the background, a Provincial officer discusses the turnout of these most Loyal Americans with a professional. Aaah, how times have changed. Now all is noise, bustle and division in that Imperial metropolis. But, for a moment, leather soles tramp over cobbles, and birdsong can still be heard.
Posted by AlFront at 14:21