My posts on Austria-Hungary appear to have struck a chord. I have yet to fight my way into the loft to dig out my Tradition 54mm K.u.K. fellows, but I have dug into the drawer of lost causes and found some figures that I painted in 1984/5. At that time, I was an impecunious student (not a commoner) of the noble University of Oxford, and could ill afford money for tin soldiers, so I only possess a few of these Great War figures in 20mm: 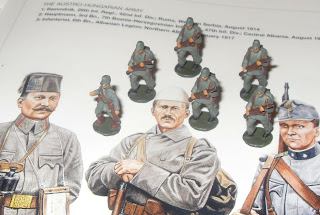 They are, as far as I remember, by Imperial figures, and some years later, as a slightly better off school master, I discovered, to my regret, that the company was no more. The moral of that tale for war gamers everywhere is 'buy quickly, and in bulk'! The figures were all early Great War period, rather limited in poses, with poorly rendered weapons, but very nicely done uniforms. What is also interesting looking at these figures now is how painting styles and techniques change: 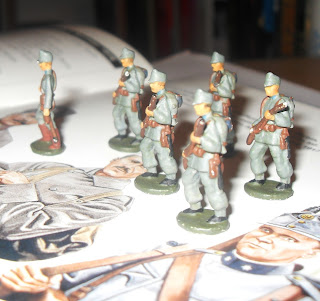 All painted in Humbrol 'Authentics' (that much, much loved range), but with no washes, or highlighting; yet I remember being rather pleased with my efforts. Also from the Imperial range were some of Belgium's finest from 1914:

Line infantry on the left, Carabiniers on the right, with a solitary Guide following up.
In response to my previous K.u.K. themed post, the Duke of Tradgardland recommended an author whom I had not heard of, and a novel about the Imperial Navy in 1914-18. It is, I am pleased to say ordered through Warwick Books, one of the finest independent book sellers known to me, and I shall have the book by tomorrow. Sadly, the English language cover of A Sailor of Austria by John Biggins is not nearly as marvellous as this German language edition: 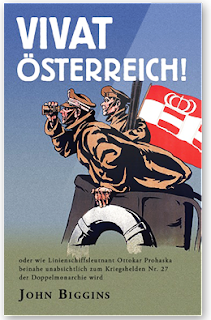 More than a few shades of that marvellous hero, Corto Maltese here!
Finally, before I sign off, let me mention an excellent middle-aged man's book on Trieste by the wonderful Welsh heroine, Jan Morris, Trieste and the Meaning of Nowhere (Faber & Faber, 2001). A book for savouring, late at night, when dark thoughts gather in the corner of one's rooms.
Posted by AlFront at 13:56