My intention in starting this blog was to amuse myself for about 20 minutes each evening. I was a little concerned that it was yet another displacement activity (I am supposed to be writing a book about women on the ultra-right in the first half of the last century), and, of course, there was the figure painting time I would use up. What I didn't expect was that I would spend half the dam' evening searching for some photographs I took a few years ago of a re-enactor taking on the role of a Queen's Ranger! I know (I think, that is) that it was at English Heritage's Festival of History at Kelmarsh Hall (I was there in the guise of a Company Commissar in the British Battalion of the International Brigades), and that there was a small group of excellently turned out Queen's Rangers. They were perfection! The photo I wanted to use on the blog was of the painted Queen's Rangers badge on the knapsack. But can I find the thing?! What was worse, I turned up a collection of postcards from the Heeresgeschichtliches Museum, Vienna, of the Austro-Hungarian Army in their heyday, the glory days of K.uK.. I won't blog all of them, but here is a taster: 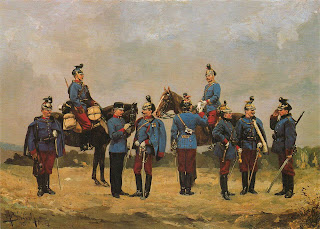 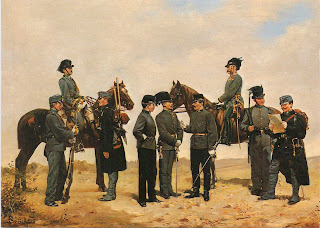 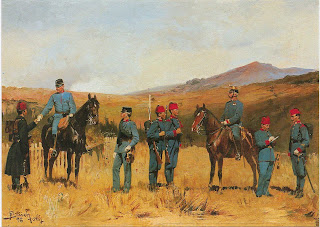 Bosnisch-herzegowinische infanterie, 1895
These are marvellous paintings, and an absolute gift for the FLW enthusiast. Now, I have started an Army Black for FLW ... ok, you can see where this is going, and what is worse, I have remembered that somewhere in the loft I have some Tradition K.u.K. infantry (now out of production). Why are we tormented thus?
The Army Museum in Vienna is a must, and covers a real range of the vanished Empire's glories, with everything from vast canvases depicting forgotten battles, to frighteningly gouged couplas from Great War fortresses on the Italian front. When I visited a couple of years ago, I was almost the only person there, which seemed apt. I wasn't sure if I was the ghost, or whether I was surrounded by the ghosts of K.u.K. Strange, too, how we see things as time passes. At school in the mid-1970s, Serbia was still the gallant country, but after the last set of Balkan horrors, how the popular image of Serbia has changed. And was the arch reactionary, Metternich, right when he warned against the fragmentation of the great multi-national Empire ? And is our latter-day Holy Roman Empire of the EU (but without a single iota of the sheer style of K.u.K., if in possession of all its schlerotic bureaucracy) similarly riding for a fall? But, now I must dream of apfelstrudel and a grosse braune, and my favourite Imperial city - Trieste.
Posted by AlFront at 15:32